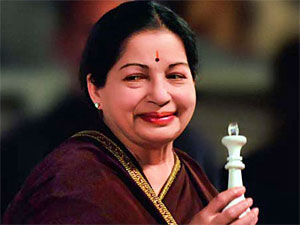 Her Government sponsored the 2013 World Chess Championship match between then champion Viswanathan Anand and challenger Magnus Carlsen at Chennai in November 2013 at a record budget of about Rs.29 Crores.

The then President of the AICF, J.C.D. Prabhakar who was a ruling party M.L.A. from the Villivakkam constituency of Chennai played the important role is chess gaining this huge sponsorship. A chess event of this magnitude has not taken place in India previously.

During this event, chess was made very popular and played in schools, parks and taken to the masses with Government led support. The organisational initiative came from the Tamil Nadu State Chess Association which did the mega event on behalf of the All India Chess Federation.

This sponsorship allowed our chess officials like D.V. Sundar, Bharat Singh Chauhan, V Hariharan and Chairman of the organising committee P.R. Venketrama Raja and others to plan and run this event successfully. The pressures of running the world championship is the equal to running one hundred marriages!

In the 2013 match, the Chief Minister personally participated in both, the opening ceremony which had the draw of lots for colour and the closing ceremony with the awarding of medals and trophies.

We pray to the God Almighty for her soul to rest in peace.  As a mark of respect to Hon’ble Chief Minister, the AICF office will remain closed on 06.12.2016.