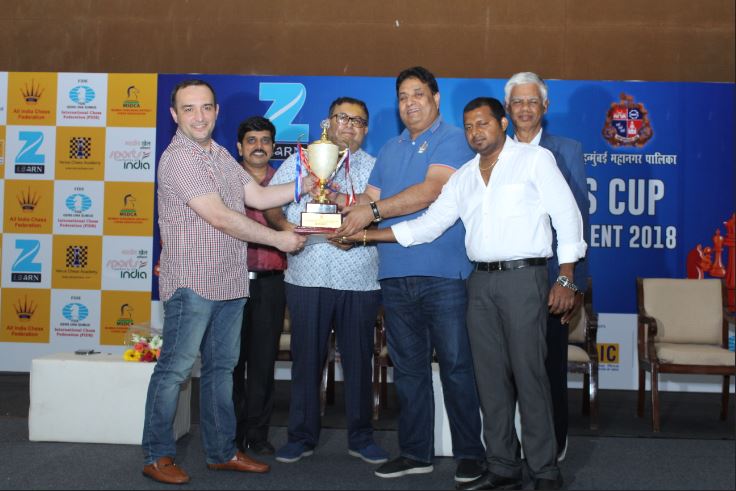 Amonatov went home with a handsome cash prize of Rs 3.3 Lakhs while the Grandmaster from the Netherlands was offered Rs 2.3 Lakhs for his efforts. India’s IM Karthik Venkatraman (6th), GM Ghosh Diptayan (8th) and GM Deepan Chakravarthy J (10th) all finished with 7.5 points each to make it to the top 10. They were awarded cash prizes of Rs 50,000, Rs 25,000 and Rs 15,000 respectively.

The game between Farrukh and Roeland started with the traditional Scotch opening. With both players exchanging pieces at regular intervals the game was equally poised. After a continuous exchange of pieces both the players were left with rook and bishop at either side. With no scope of a clear victory both the players agreed for a draw after 25 moves with Farrukh emerging as the winner on the virtue of a better tie-break score.

The semi-final game between IM Visakh (ELO 2467) and GM Manik Mikulas (ELO 2399) started with Trompowsky opening. Both the games were equally poised with each of them playing safe. With both the players exhausting all their moves they decided to draw the match after 57 moves.

In another Match, Top seed GM Kravtsiv Martyn (ELO 2662) and GM Pruijssers Roeland (ELO 2514) started with French defence which converted into an irregular opening. In the middle game, Roeland sacrificed his queen for 2 rooks and gained a pawn along with that. He then attacked the king and got back his queen in exchange for his Rook and Bishop. In the endgame with an extra pawn and the knight on the other side, Martyn could not defend his position and accepted his defeat in 84 moves.