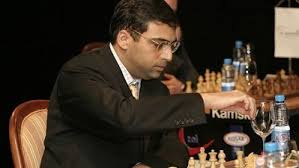 Former five-time world chess champion Viswanathan Anand drew Veselin Topalov in the final round to finish runner-up and undefeated in the Norway Chess 2015 that concluded with the ninth and final round on Thursday.

The Topalov versus Anand game ended in a draw after just 18 moves by repetition. Topalov did not want to press. Given that Anand played within two weeks of his mother’s passing away, it was an extraordinary result for him.

Carlsen who had been gaining ratings after every event is now taking a beating. He loses 23 Elo from the event after the last round defeat to his trainer and countryman Hammer. Anand will also overtake Caruana into the No.2 rating in the July 1, 2015 FIDE rating list.

Anand is gaining twelve Elo from this contest. He won three games and drew six to remain undefeated. He has had a good run this year and should be continuing this into the rest of his engagements.

Anand played the Queen’s Gambit declined with the black pieces and the players repeated the position with bishop moves to make a draw. Topalov is gaining 18 Elo from this 2946 rating performance.