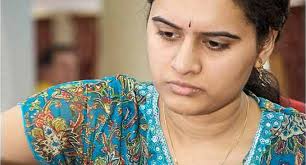 Grandmaster and one of the top woman players in the world, Koneru Humpy ran in to a bad day in office as she lost from a winning position against International Master Himanshu Sharma in the fourth round of Commonwealth Chess Championship now underway here.

Humpy, after attaining a winning position did not know the time control in-force here and was declared lost on time after her time ran out. Humpy cited that she was not aware of the rules. It may be recalled that Tania Sachdev had lost in similar fashion in the first round.

Meanwhile top seed Grandmaster Abhijeet Gupta also got very lucky as his opponent Ramnath Bhuvnesh forgot to press his clock in the final moments of the game and was declared lost on time as well. After attaining a decent position Gupta mishandled and was a pawn less in a drawable endgame when disaster struck Bhuvnesh.

Gupta and Himanshu Sharma share the lead with five others in one of the strongest ever Commonwealth championship.

Grandmaster Sahaj Grover remained in the leader’s group after defeating International Master S Nitin in one of the finer games of the day. From a Sicilian defense, Grover got a strong attack after quick development and did not let his advantage slip in the middle game.

Bangladeshi Grandmaster Niaz Murshed is the only non-Indian in the leading pack with his fourth victory in the tournament coming at the expense of young Saurabh Anand. Murshed was at the top of his game in this round as he outclassed Anand in all departments of the game.

Grandmasters Murali Karthikeyan, M R Lalith Babu and International Master Arghyadip Das are the other Indian players sharing the lead. The battle is only going to heat up as the championship now enters the half way stage.