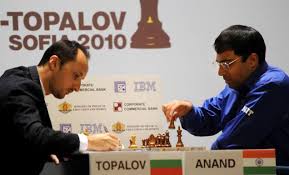 Anand To Face Topalov In Title Game
By Arvind Aaron

Five- time former world champion Viswanathan Anand was at his tactical best in his eighth round victory over Jon Ludvig Hammer of Norway on June 24, 2015.

This victory, Anand’s third in eight games leaves him undefeated and only half a point behind tournament leader Veselin Topalov. Topalov suffered his first defeat of the meet against Anish Giri of the Netherlands.

Topalov, jolted leads with six points and Anand is on 5.5 points in clear second place.
Anand takes on Topalov with the black pieces in the last round. It will be a winner take all contest.
In an English opening, Anand as white won a pawn in a tactical skirmish. In the end, the Chennai genius sacrificed a bishop and it netted two more pawns in a queen and rook ending. Hammer resigned on move 36.

Anand had defeated Topalov with black in Sofia, May 2010 in the world title match final game. So tune to www.norwaychess.com