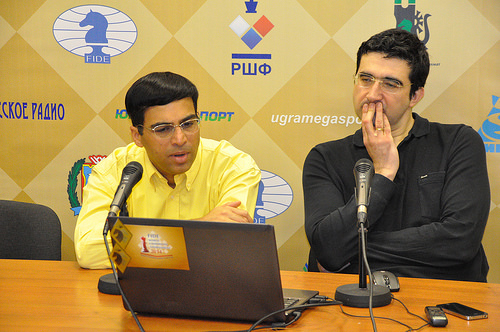 Anand Keeps Lead After Draw With Kramnik
By Arvind Aaron

In a very sharp game, former world champions Viswanathan Anand and Vladimir Kramnik battled a queen’s gambit declined opening with the Indian making the first move. In the end, it was a fighting 30-move draw in the fourth round of the FIDE Candidates Tournament at Khanty-Mansiysk in Russia on March 17.

Kramnik sacrificed a knight in the middle of the board to repeat the position and take a draw. Welcome to the new aggressive chess of the new digital age. Both players did not castle! Kramnik and Anand are doing exactly what the younger breed like Carlsen, Nakamura and Caruana are doing.

Anand leads the 8-player event with 3/4 and is followed by Kramnik and Aronian on 2.5 points. Aronian crushed Svidler and pushed him out of the second slot. In the other games, Mamedyarov recovered with a win over Andreikin and Karjakin drew with Topalov.

Ten rounds remain to be played in this event. The winner will challenge Carlsen later this year. The event will conclude on March 31, 2014.