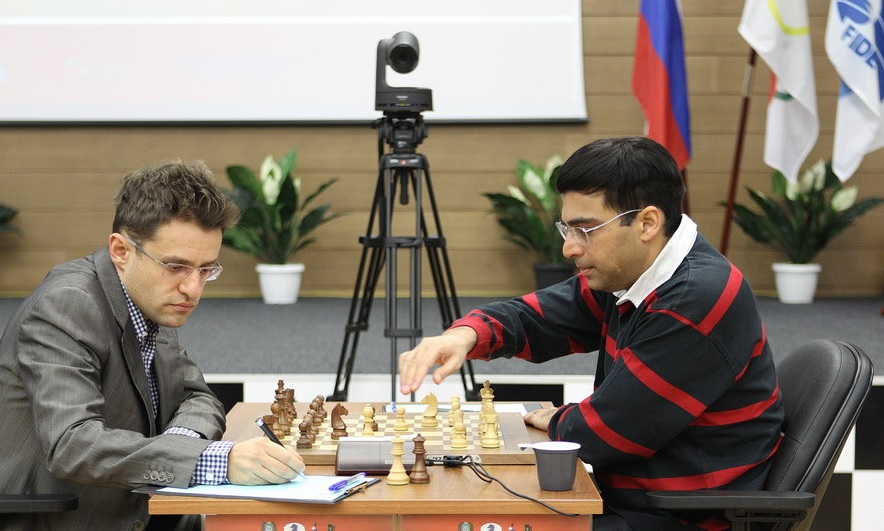 Anand Starts With Victory Over Nemesis Aronian – By Arvind Aaron

Former world champion Viswanathan Anand scored an important opening round win over World No.2 Levon Aronian of Armenia in the FIDE World Chess Championship Candidates Tournament at Khanty-Mansiysk in Russia on March 13, 2014.

“I came from +30 C in Chennai and stayed indoors in the hotel for two days and did not see the town,” said Anand who quietly crushed Aronian with the white pieces in 47 moves. Anand said he did not want to go out as the snow was melting at this time and the temperature was below zero in this part of Russia.

The 5-time world champion who came from a poor run of events after unsuccessfully defending his crown at Chennai in Nov 2013, went for the anti-Marshall variation and by move 25 was holding on to a nice advantage of two bishops in a rooks ending. Aronian resigned when his knight was trapped for the only decisive game of the round.

Anand’s opening preparation and execution of the endgame were the highlights of this round. A couple of more victories would erase his poor recent run at Chennai, London and Zurich.

This is a 8-player double all-play-all and 13 games remain to be played. The other three games between Andreikin-Kramnik, Karjakin-Svidler and Mamedyarov-Topalov ended in draws.