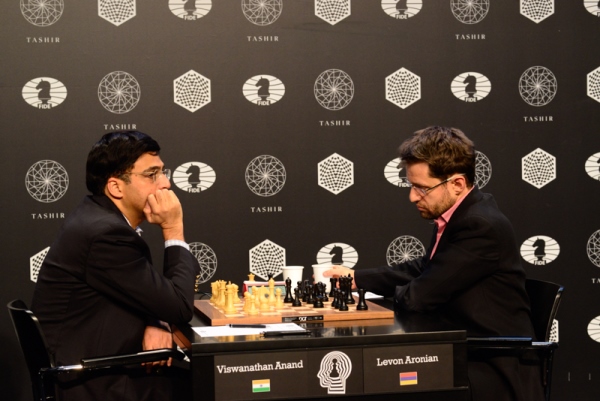 Five time former world champion Viswanathan Anand overcame one of the leaders Levon Aronian of Armenia in the ninth round of the FIDE Candidates Tournament in Moscow on March 21.

In a double rook ending, Anand played a crucial 38th move abandoning his central pawn in his attempt to use the space into a bigger advantage.  On move 66, Anand gave an intermezzo check before capturing the sacrificed rook to win his third game.  Anand and Karjakin are jointly leading with 5½/9. Five rounds remain to be played.

Anand opened with his king pawn and went for the Giuoco Piano  and not the Ruy Lopez on move three.  He gained space with Bd5. He attacked the black weak points with his rook before advancing his king for a brilliant win.  Two defeats in Linares 2003 came in rook endings. Commentator said he had to learn rook endings then. Now, this one game has lots to learn from by all players and will be the top example in rook ending books.