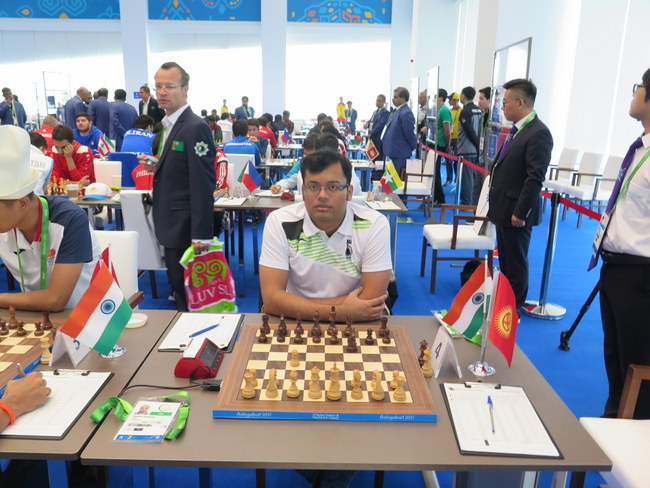 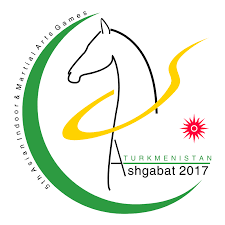 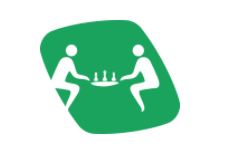 The highest seeds produced more virtuoso performances in Round 3 of the men’s and women’s Standard Individual Chess events at the Ashgabat 2017 5th Asian Indoor and Martial Arts Games on Friday morning.

On the men’s side, GM Le Quang Liem (VIE) and GM Lu Shanglei (CHN) have three points, but second seed GM Wang Yue (CHN) could only draw against GM Enamul Hossain (BAN), despite having an extra pawn. So Wang is a half point behind Le and Lu. 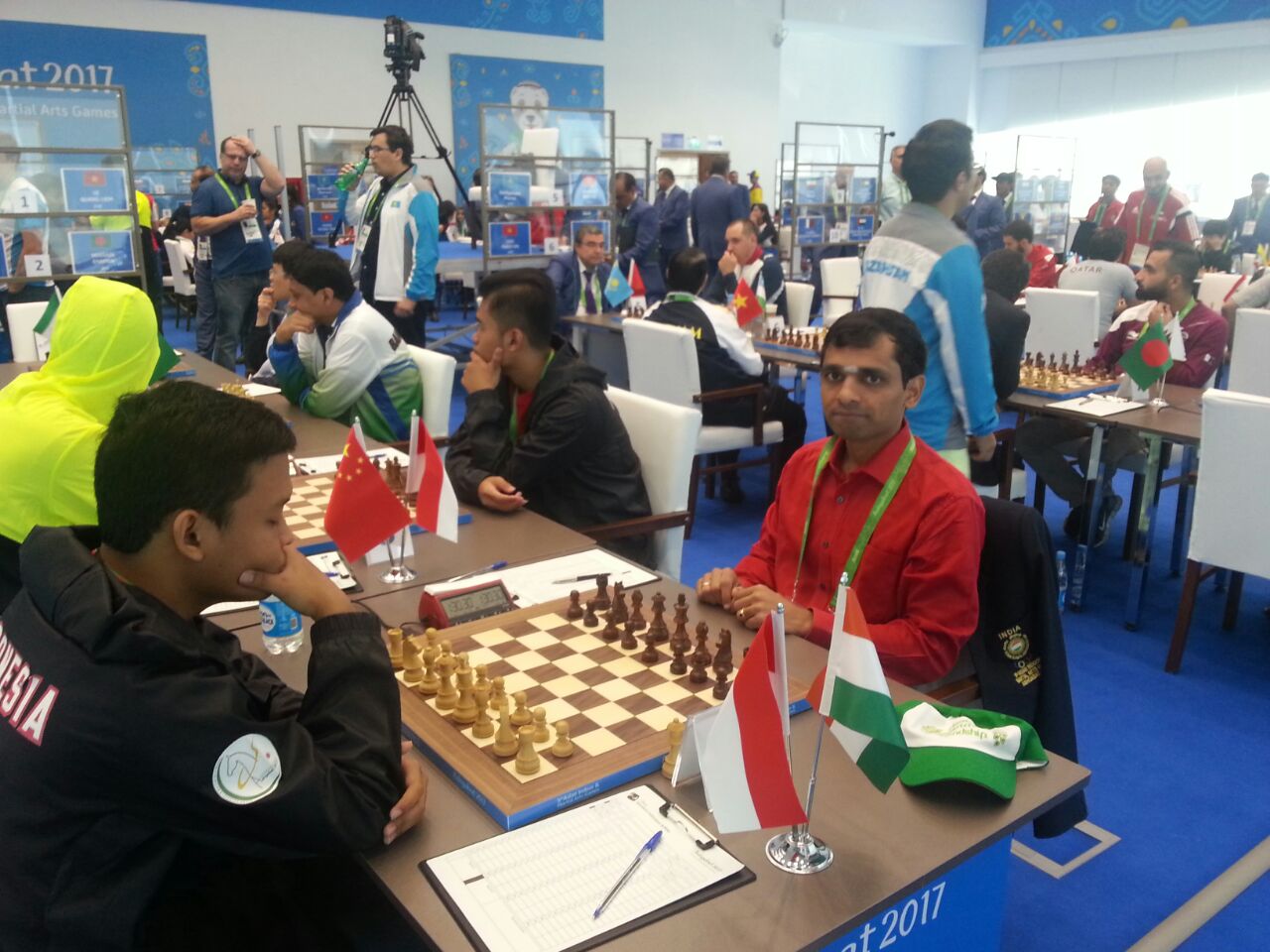 GM Sasikiran Krishnan (IND) started his campaign by winning two games and drawing one. He is up against GM Enamul Hossain (BAN) in the fourth round. 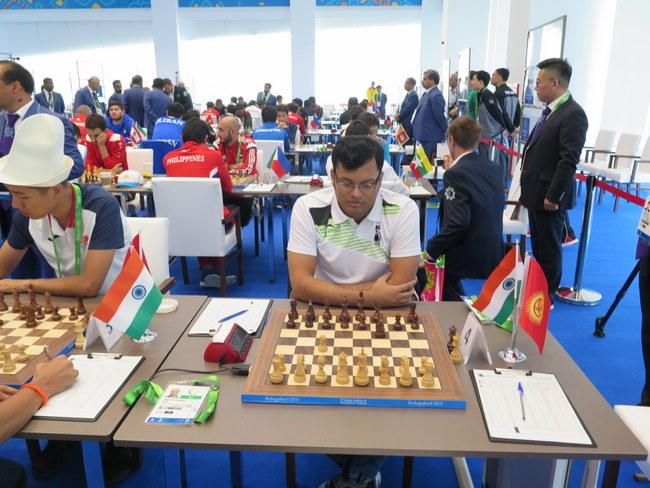 Down on board 8, GM Surya Shekar Ganguly (IND), playing black, took advantage of a rigid pawn structure on IM Semetey Tologontegin’s queenside with a series of four consecutive pawn thrusts, f6, e5, e4, and f5. At this point, move 23, Ganguly had an enormous time advantage and duly pressed forward in the center, winning convincingly. 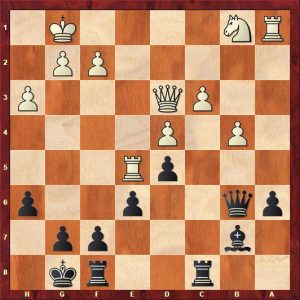 On a critical moment, at move 20:
“Already when I played Qb6 I saw white could play b4 and I could answer with f6. I think he hadn’t wanted to play b4, he had planned probably Re2. But at the last minute he saw that once he got his kinght out and he put a rook on b1 I could play Rxc3. So already at that point it might be too late to avoid black getting a big advantage.” Ganguly commented. 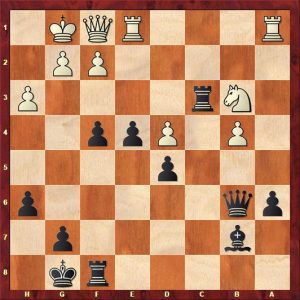 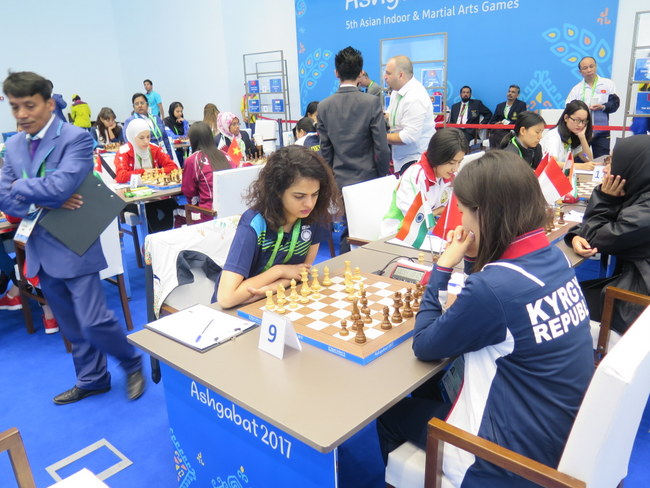 Among the women, the most watched clash was IM Tania Sachdev (IND) with white against IM Sarasadat Khademalsharieh (IRN).

Tania built up a strong position, Khademalsharieh’s knight on c6 leapt to d4 with a threat to Tania’s queen on e2. Tania was caught unprepared for this, and had to retreat her queen, thereby abandoning attacking ambitions. The game was drawn.

Meanwhile, on board 1, Lei Tingjie (CHN) defeated Zhu Chen (QAT) in a tight battle. Women’s World Champion Tan Zhongyi (CHN) is the only other player with three points, so the two Chinese stars will battle each other in Round 4. 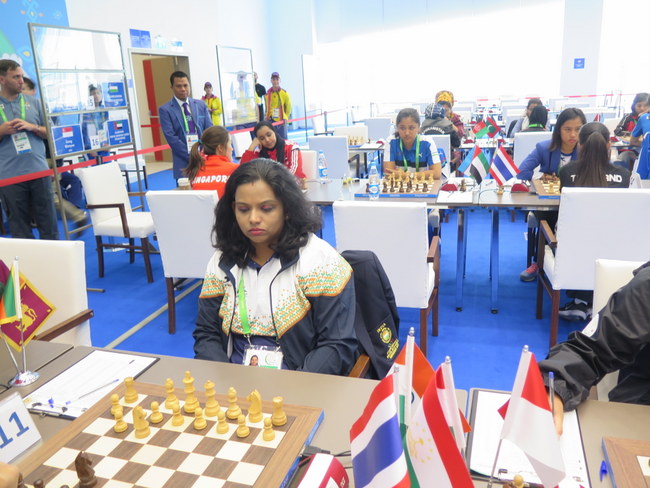 On board 8, IM Vijaylakshmi S (IND) suffered a shock defeat at the hands of WIM Shamima Akter (BAN) in Round 3. With a dismal score of one point, she will be facing WFM Wadima Humaid (UAE) in the next round.