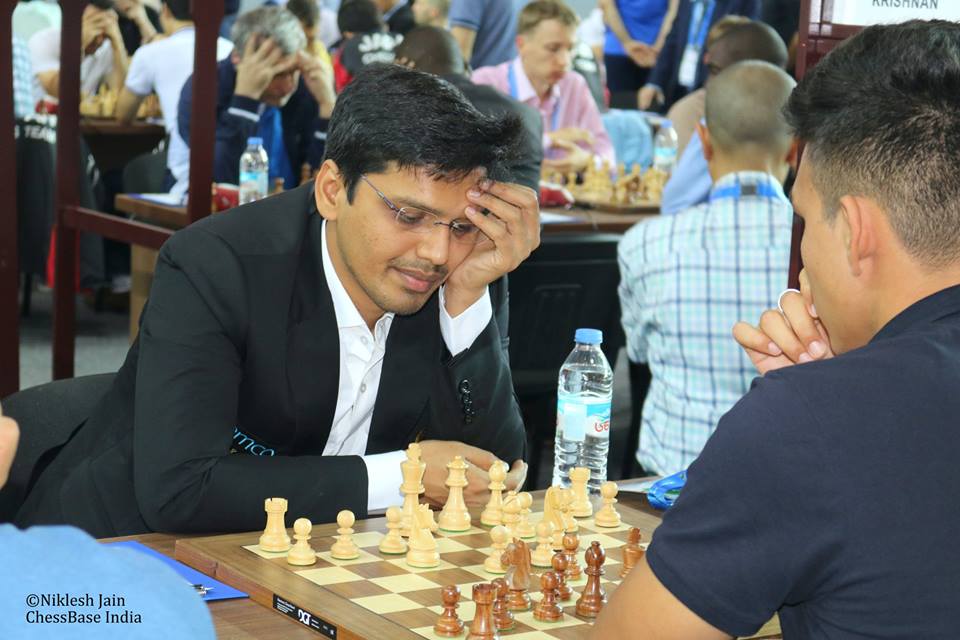 The 43rd World Chess Olympiad, held in Batumi Sports Palace is in the final phase. At the end of the 7th round, there are more leaders in both sections of the tournament. In the Open, Five-time World Champion Viswanathan Anand was held to a draw by Egyptian Grandmaster Amin Bassem.  GM Vidit Gujrathi lost playing white against his much lower-rated opponent IM Adham Fawzy  in a queen pawn game. Timely victories by P Harikrishna against GM Adly Ahmed and  GM Sasikairan Krishnan against Hesham Abdelrahman took India to a 2.5-1.5 victory. Meanwhile, Indian Women’s team competed with local favourites Georgia. All the games were drawn.

Playing on the second board, Harikrishna gained positional advantage early in the game and sustained the pressure on Ahmed Adly to score India’s first win in the round in 42 moves.

Similarly, Sasikiran did not face much problem against Abdelrahman Hesham on the fourth board to score a full point after 56 moves.

The women section was much closely fought with all games ending in draws with none of the players achieving a breakthrough.

On the top board, India’s highest-rated women player Koneru Humpy, playing white, was held to a draw by Nana Dzagnidze in a dutch stonewall, Dronavalli Harika drew Lela Javakhishvili in a Sicilian defence game on the second board, Arjuna awardee Tania Sachdev drew Nino Batsiashvili on the third board.

In the fourth board also saw the point being equally divided between Padmini Rout and Bela Khotenashvili.