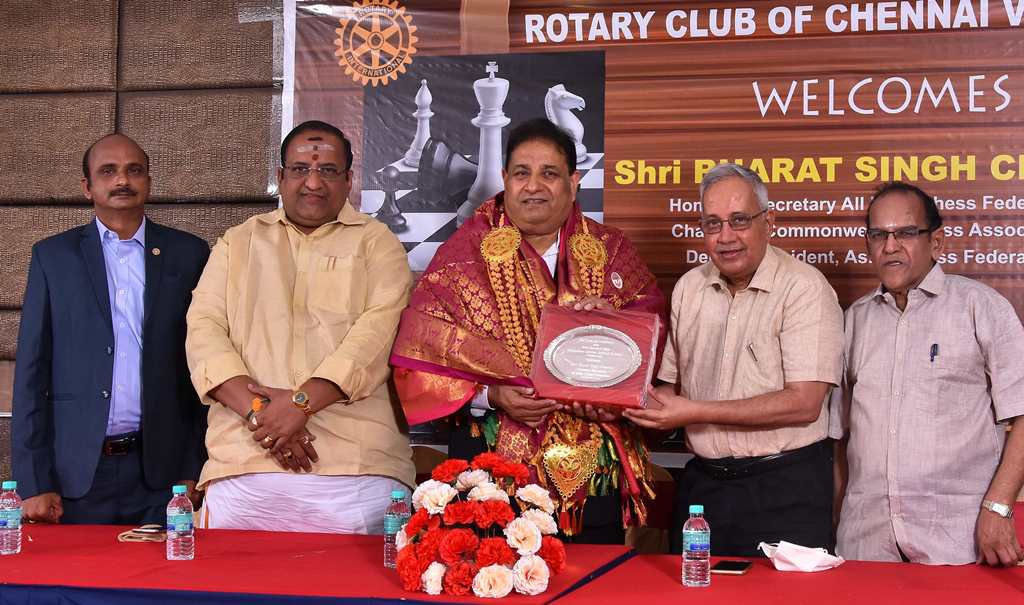 “Tamil Nadu is like a second home to me, I have played in Palani Tournament eleven times,” said Bharat Singh Chauhan while replying to felicitations in the function organised by Rotary Club of Chennai, Velachery at Hotel Raj Park in Chennai on Ash Wednesday, February 17, 2021. 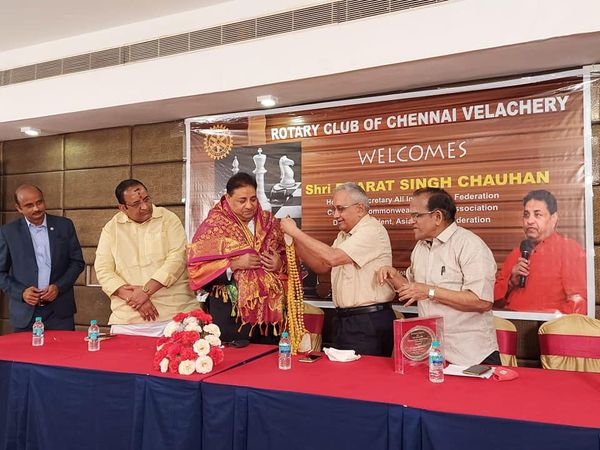 While replying to felicitations, 1958-born Bharat Singh said Tamil Nadu has plenty of chess culture. “It is important to respect the chess player,” said Bharat Singh who was thrilled to be in the midst of majority of Tamil Nadu’s chess Grand Masters and International Masters. Bharat Singh thanked S Kailasanathan and Microsense for the various support for chess and the Kramnik Training camps for Indian players. 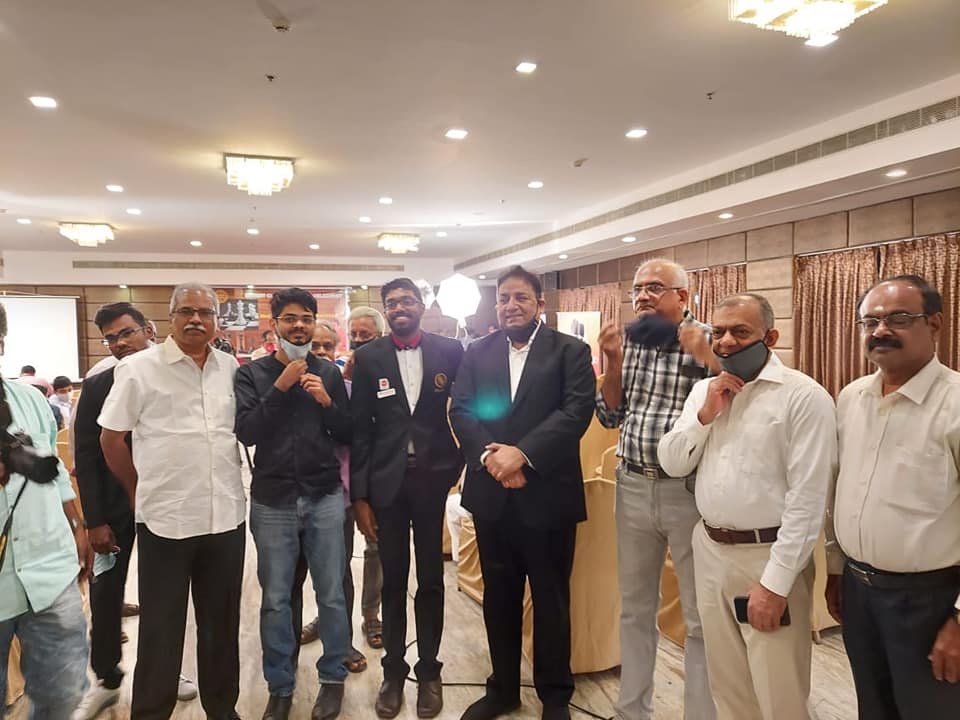 Chess Patron and Managing Director of Microsense, S Kailasanathan said Bharat Singh’s winning the AICF elections is a “new beginning for chess in India”. The game has won. Chess should grow from strength to strength, concluded Kailasanathan in his brief but clear message for the future. Players are waiting for the National Chess League and Tamil Nadu Chess League and are hopeful about the new regime.

India’s International Arbiter, 77-year old, V Kameswaran said Bharat Singh has a helpful nature and cited his own Baku example. “Rotary means service, this event is their service to chess.” Indian chess is in the dynamic hands of Bharat Singh, he believed.

Rtn Meganathan, President of the Rotary-Velachery said their organisation had spent 2.3 billion dollars to erradicate polio in its 102-year existence among other achievements. 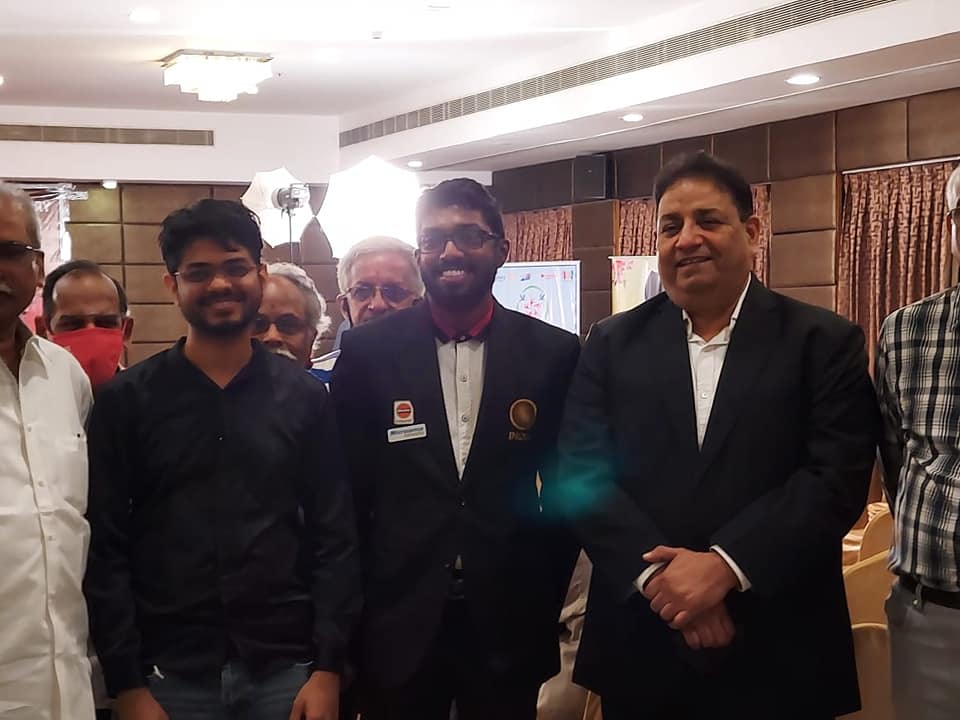 A total of 17 GMs attended this star studded evening function that included buffet dinner in the heart of Chennai city. Former FIDE President Kirsan Ilyumzhinov’s first Press Meeting in Chennai and FIDE awarding the Anand v Carlsen 2013 match by Israel Gelfer were both held in this same Hotel Raj Park. The full capacity seventh floor hall was the largest chess gathering of titled players in the last 12 months in India.

In five days, a band of committed people led by co-ordinator S.C. Subramanian made this show possible. The Master of Ceremonies was Namashivayam, father of WIM Pon N Krithika (born 1992).

A Vedasubramaniam, Correspondent, Sree Sankara Bala Vidyalaya Golden Jubilee School said his school had chess in the last period and chess coaches from the vicinity were teaching them. So, during the lockdown, our students were quietly able to play chess at home unlike other children. For his national and International success, Avalpoondurai Ravikumar Ilamparthi was offered free education in his school right until twelfth standard by Vedasubramaniam. He said Ilamparthi’s brother is a special child and had to be carried by his mother, a Corporation School Teacher.

The players were honoured through Grassroots Chess Promotions and its patron S Kailasanathan.  It is significant that Kailasanathan was the Tamil Nadu State Champion exactly 50 years ago at Trichy 1971. Chess players formed ninety percentage of the couple of hundred people who formed the august gathering. That Rotarians formed more than ten percent, means many of then also played chess.

Grassroots Chess Promotion honoured Tamil Nadu chess players who achieved GM, IM, WGM, WIM titles in the last two years. Every titled player present was honoured. So this was an event blended with chess players, arbiters, chess administrators and patrons. The Rotarians were more involved in felicitating Bharat Singh Chauhan. Due to Covid-19 and the conditions, there was no Chennai Open this year. Players used the opportunity to meet and greet each other.

The Grassroots Chess Promotions presentation started with Grand Master N.R. Visakh followed by G Akash who became Grand Master in 2020, the latest from Tamil Nadu. That was followed by WGMs Srija Seshadri, V Varshini, R Vaishali and P.V. Nandhidhaa. None of the awardees spoke in reply but the mood was light and players generally cheerful. International Masters G.B. Harshavardhan, A Ra. Harikrishnan, Bharath Subramaniyam, M Pranesh were awarded for their titles in the last two years.

Some Grand Masters  like P Iniyan of Erode, D Gukesh and Praggnanandhaa were honoured for winning international tournaments in 2019-2020.

Two young chess coaches were awarded making the awardees total 12. GM N Srinath for being the Vice Captain of the Gold Medal winning Indian Olympiad chess team. The other was GM M Shyam Sundar who trained the Indian Youth team in the Online FIDE Championships. 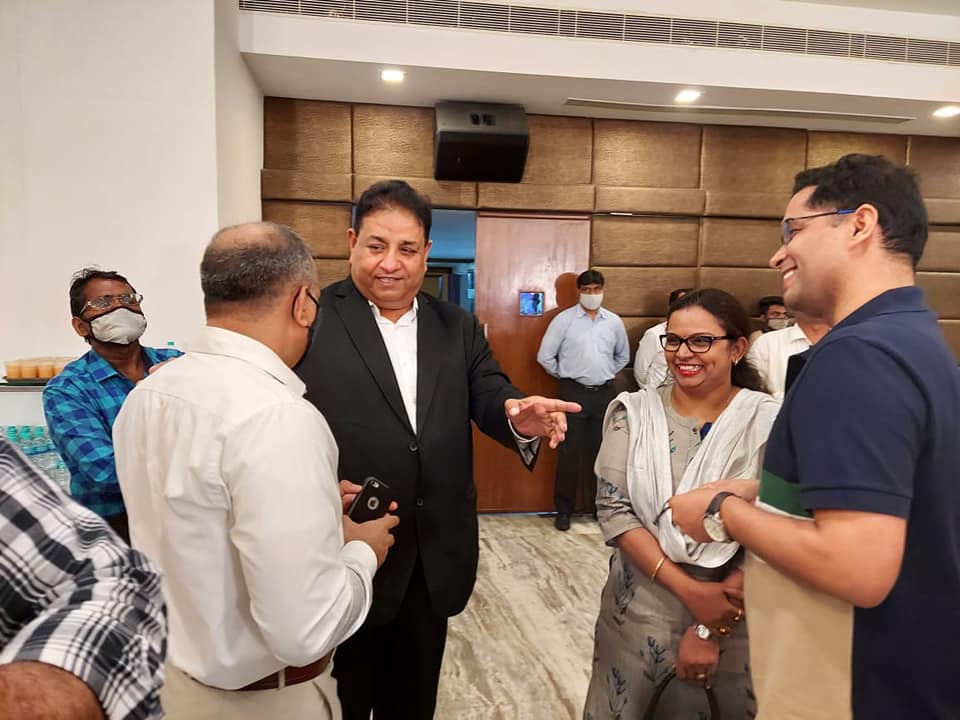 Among the veteran people around was 76-year old IA K.R. Seshadri. Those who had retired were IA Srivatsan (VRS), IM Sudhakar Babu (VRS) and FM Shantharam. Evening being the prime coaching time, and considering that 80% of those who came teach chess, those who came either rescheduled their classes or cancelled it for a date with fellow chess players and a handshake with Bharat Singh.

With most of the speeches having the common FIDE motto, “Gens Una Sumus” meaning “We are one family” it was difficult to know less than 50 people for those who had been into chess for as little as ten years.

This meeting served as a felicitation, meeting old friends and rivals. An opportunity to congratulate Bharat Singh and hope for changes like the Indian Chess League that was not happening in India outside of Maharashtra previously.