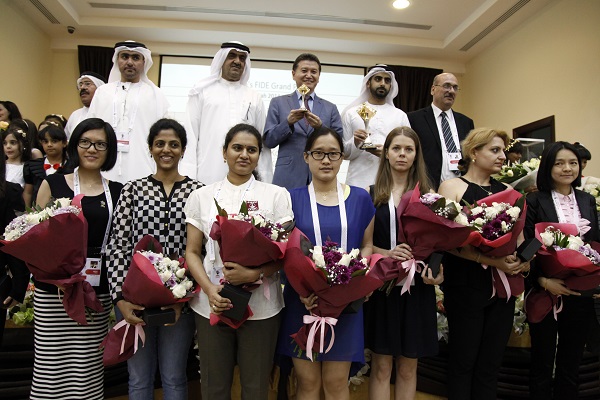 Dronavalli Harika won her opening round of the final leg of the FIDE Grand Prix at Sharjah on August 25, 2014.

However, Grand Prix leader, Koneru Humpy walked dangerously with her rook in the middle and lost to Batchimeg Tuvshintugs of Mongolia. Ten rounds remain to be played.

Harika played the ending well and outplayed Alina L’Ami of Romania with the black pieces. In her very first game since getting married on August 13, Humpy faced problems defending her rook in the middle of the board and suffered a shock defeat. Humpy is accompanied by her mother Koneru Latha.

World women’s champion Hou Yifan is looking forward to overtake Judit Polgar’s rating this year. She started with a win against Nafisa Muminova with the black pieces.

The winner of the Grand Prix or top finisher will challenge world women’s champion Hou Yifan in the third quarter of 2015.

FIDE President promised to announce the hosting city of the Women’s World Chess Championship at the closing ceremony of the Grand Prix in Sharjah on the sixth of September.

The event is taking place at the Sharjah Chess Club, the biggest chess facility in the world. Significantly, eight of the 12 players in this all-play-all are from Asia. Three from China, two from India, one each from Qatar, Mongolia and Uzbekistan.