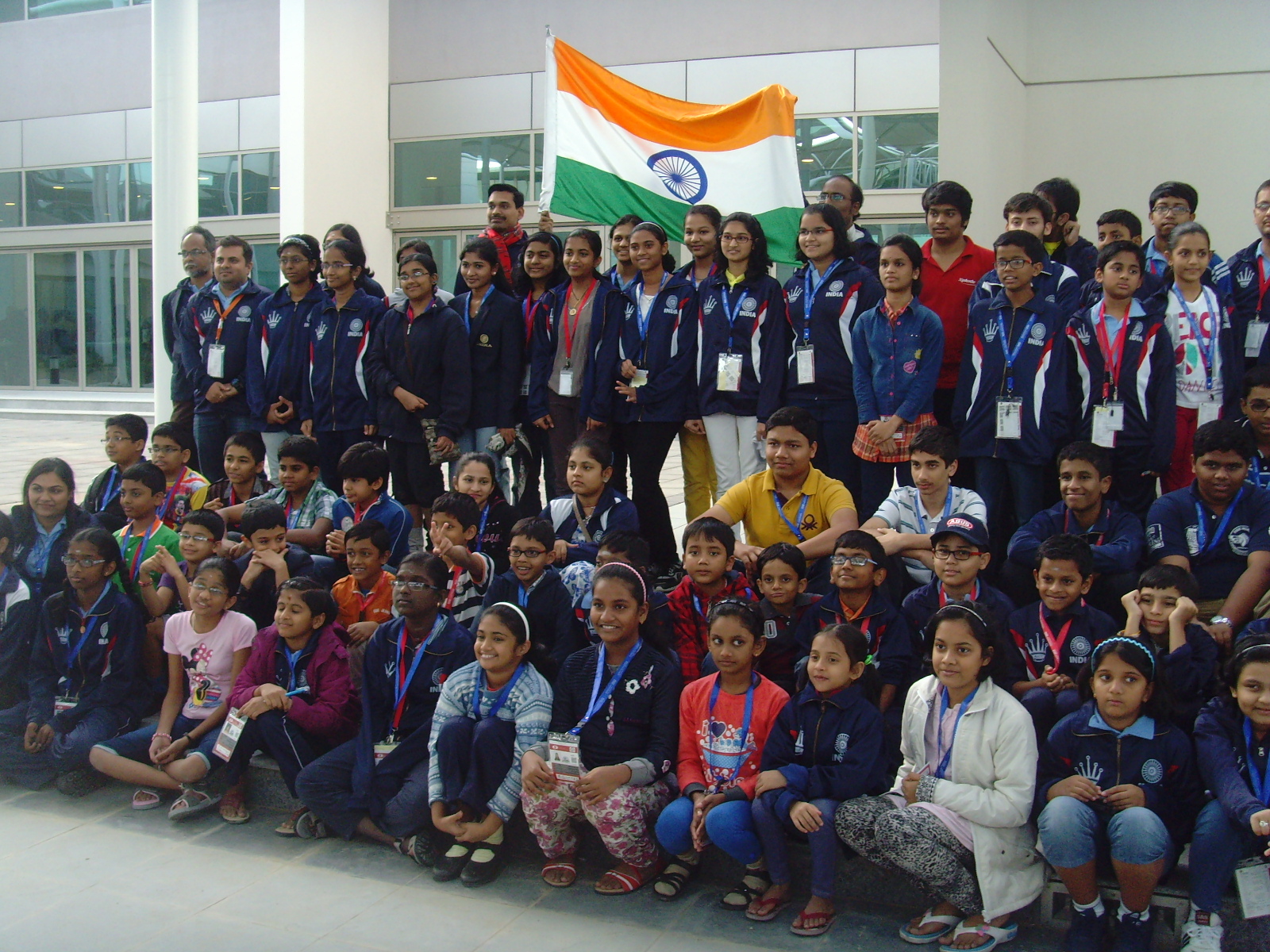 Four Indians Among Leaders
By Arvind Aaron
R Praggnanandhaa of Chennai is leading the World Under-8 Chess Championship at Al-Ain in the UAE on December 26, 2013. Three others are in shared lead in the Girls Under-8, Girls Under-10 sections.
Asian players are in lead in four sections and in joint lead in three other sections in the World Youth Chess Championship that is taking place at Al-Ain in the United Arab Emirates on December 26, 2013.
India had a mixed day in round nine. Raghunandan (Open U-12), Vaishali (Girls U-12) and Mahalakshmi (Girls U-16) who were in joint lead suffered defeats.
By organising this contest, the Al-Ain organisers have offered a big opportunity to fellow Asians to compete and win medals in the World Youth Championship in their own backyard. The Asian challenge is largely led by India, China and Iran who have players in the sole lead.
Girls
Three Asians, Divya Deshmukh (Ind), Mungunzul Baterdene (Mgl) and Qian Wan (Chn) are among the four leaders with 7.5/9 in the Girls Under-9 section.
In the Girls under-10 section, Saina  Salonika of India drew Anastasia Vuller of FIDE to slip from sole lead to shared lead. C Lakshmi, also of India defeated another Indian Krystal Fernandes to join Saina in the lead on 7.5 points. China’s Zhang Xiao, Iran’s Zahedifar Anahita are in the joint third place on seven points.
While the two Indians, Vaishali and Vantika Agrawal were defeated in the top and third boards in the Girls Under-12 section, China’s Shengxin Zhao of China won on board two to move to second spot with 7.5 points. Tied for the fourth place are Vaishali, Assel Serikbay (Kaz) on seven points.
Anna Vasenina of Russia is running away in the Girls Under-14 section. Although she drew round nine, she leads with 1.5 point margin. Bakhora Abdusattorova (Uzb) is tied for the second place on seven points.
Iran’s Sarasadat Khademalsharieh defeated India’s Mahalakshmi in board one with the black pieces to remain in joint lead with Adela Velikic of Serbia. They have 7.5 points. China’s Tianlu Gu is on seven points and shares the third place.
The Girls Under-18 section is headed for a photo finish. Top seed Dinara Saduakassova of Kazakhstan won with white to be among the five leaders on 7/9.
Boys/Open
There is no stopping Praggnanandhaa in the Under-8 section. This Indian has been impressive and has won all nine games. He leads the section by a wide 1.5-point margin.
Liang Awonder of USA is leading the Open Under-10 section with a 9/9 score. In the second place is Arien Abdrashev of Kazakhstan on eight points. In the third place are two Asians, L.N. Ram Aravind and Kushagra Mohan (both Ind) on seven points.
Aram Hakobuan of Armenia defeated Raghunandan on the top board to wrest sole lead in the Open Under-12 section. Aram is on 8/9 while another Indian, Siva Mahadevan shares the second spot with 7.5 points.
In the Open Under-14 section, China’s Di Li leads with 8.5/9. Saparmyrat Atabayev of Turkmenistan shares the second and third places with 7.5 points.
Kiril Alekseenko of Russia leads the Open Under-16 section with 8/9. Four Asians share the second place along with others on seven points: Karthikeyan Murali, Girish Koushik (both Ind), Yije Wang (Chn) and Masoud Mosadeghpour (Irn).
Pouya Idani of Iran figured in a draw top board game against Vaibhav Suri of India. Pouya maintains his lead with 7.5 points. Two rounds remain to be played and the event will conclude on December 29.