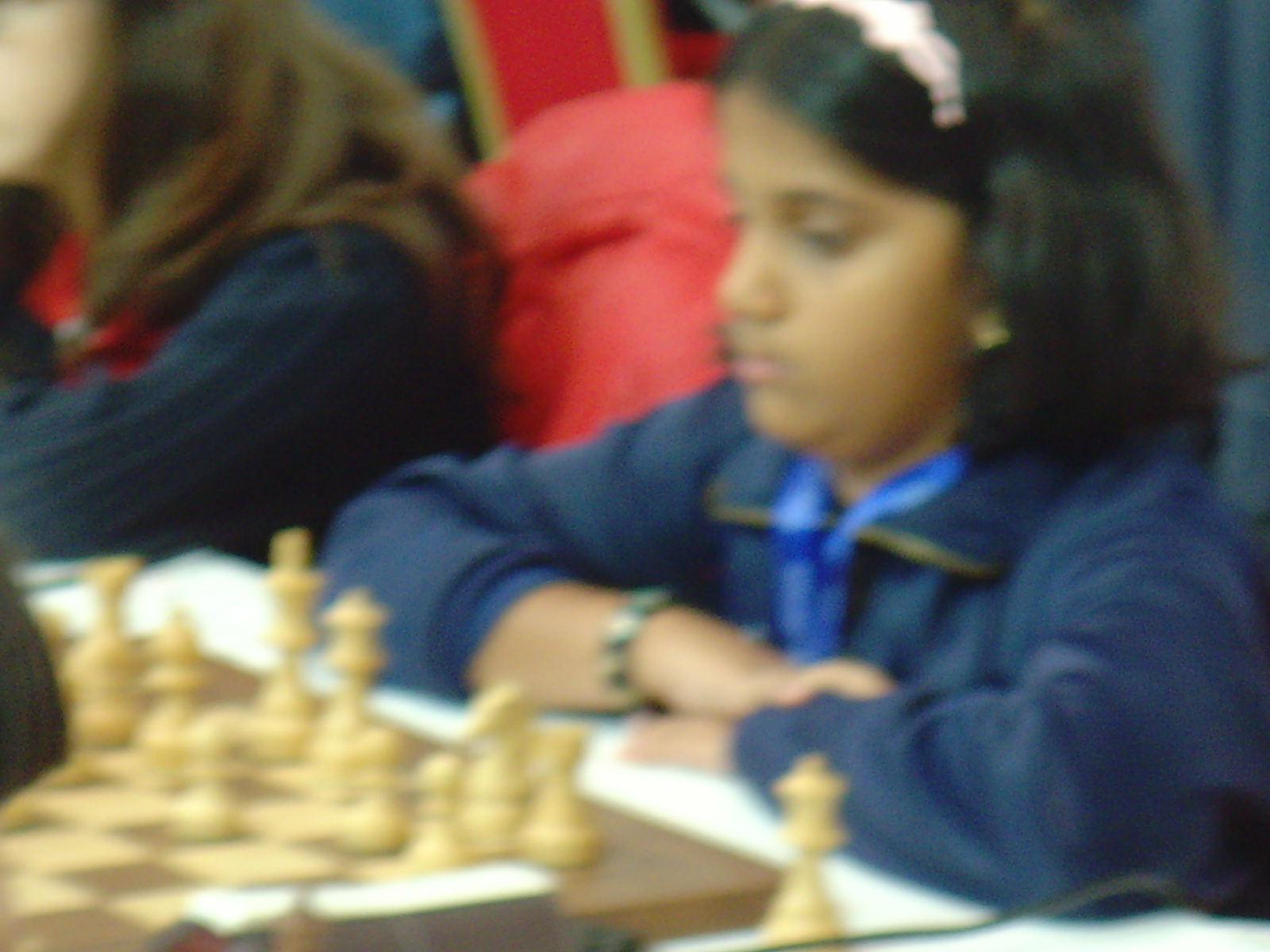 Saina Salonika, Praggnanandhaa Clear Leaders
By Arvind Aaron
Five Indians are in the lead at the end of the eighth round in the World Youth Chess Championship at Al-Ain in UAE on December 25.
Saina Salonika (Girls U-10) and Praggnanandhaa (Open U-8) are the sole leaders in their respective sections. R Vaishali (Girls, U-12), M Mahalakshmi (Girls U-16) and K.S. Raghunandan (Open U-12) are the joint leaders in their respective sections. Various others are in striking distance of making it to the top.
Asians are leading in five sections, two in girls and three in boys at the end of the eighth round in the World Youth Chess Championship at Al-Ain in United Arab Emirates on December 24, 2013. Additionally, they are among the joint leaders in one girls’ and one boys’ section apiece. A bountiful of medals are awaiting our players.
The Girls Under-8 section is dominated by Asians. Divya Deshmukh of India was defeated by Mongolia’s Mungunzul Bat-erdene. This recast the leaders with the Mongolian and China’s Qian Wan leading with seven points from eight games. With three rounds still to be played, four Asians are holding on to the top four places so far.
The leaders were recast in the Girls Under-10 section also. C Lakshmi was replaced by another Indian, Saina Salonika on seven points from eight games. C Lakshmi, Krystal Stella Fernandes (both India), Tran Gia Thu Pham (Vie) are among the leaders on 6.5 points.
In the Girls Under-12 section, R Vaishali of India had joined the Azeri and Russian leaders on seven points from eight games. In the joint fourth place is Vantika Agrawal (Ind) and Shengxin Zhao (Chn) on 6.5 points.
Russia’s Anna Vasenina is running away in the Girls Under-14 section with 8/8. Two players are in second place with 6.5 points and Asians are a further half point behind here.
The highlight of the Girls Under-16 section was the victory of M Mahalakshmi of India over overnight sole leader Tianlu Gu of China. It opened up the section and now three Asians are among the leaders. It includes Mahalakshmi, Tianlu Gu and Sarasadat Khademalsharieh (Iran) on 6.5/8.
Top seed Dinara Saduakassova of Kazakhstan slid from joint lead to shared third place after a draw with black against Sabina Ibrahimova. Another Asian, Gozel Atabayeva of Turkmenistan joined Dinara in the third spot on six points.
In the Open Under-8 section, Praggnanandhaa of India extended his lead from one point to 1.5-points after scoring eight straight victories. In the joint second place on 6.5 points are two Asians, Amartuvshni Ganzorig (Mng) and Pham Thien Phuc Vo (Vie).
In the Open Under-10, Arien Abdrashev of Kazakhstan is in shared second place with seven points, one point behind the leader from United States of America.
K.S. Raghunandan overcame a Dutch opponent to join Aram Hakobyan of Armenia in the lead with 7/8 in the Open Under-12 section. Siva Mahadevan, also of India is in joint third place with 6.5 points.
Di Li of China overcame Aravindh Chithambaram (6) of India in a top board clash to widen his lead to a full point in the Open Under-14 section. Di Li leads with 7.5 points. Another Chinese Yan Liu shares the second spot with Saparmyrat Atabayev (Tkm) on 6.5 points. Asia could make a podium sweep here.
In the Under-16 section, Masoud (Iran), Yije (Chn), Girish Koushik, Karthikeyan Murali and Sayantan Das (all Ind) are on six points and share the fourth place.
Pouya Idani of Iran is leading the World Under-18 championship by a clear one point margin. Six players are tied for the second place and it includes Vaibhav Suri of India on six points.
December 25 is a free day and the players are taken out for excursion. Three rounds remain to be played in this 1850-player event.