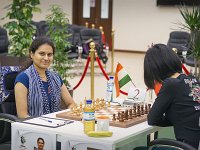 The key game of the Grand Prix series had just been played. Koneru Humpy lost a level rook ending to Hou Yifan of China in the fourth round of the FIDE Grand Prix at Sharjah on August 28.

To win the Grand Prix series, Humpy does not need to win the event. She needs to score the same points as Hou Yifan. It is almost certain that Humpy is the challenger for the world women’s championship.

From the opening, Humpy failed to extract any advantage despite playing white. In the level rook ending, Humpy’s king was far away in the queen side and that resulted in Hou Yifan’s win. 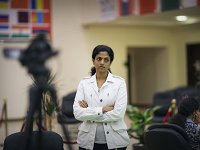 Harika defended well after white’s bishop sacrifice to draw after 58 moves. Harika has played three black games and will be getting more white games in the next seven rounds.

Harika, Hou Yifan, Ushenina and Batchimeg are in joint second place with three points. Former world champion Zhu Chen obtained a clear advantage and then lost to the Mongolian Batchimeg. August 29, Friday is a rest day and round five resumes on Saturday August 30, 2014.