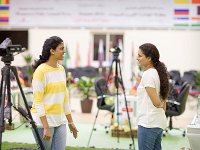 Humpy Recovers With A Win
By Arvind Aaron

World women’s champion Hou Yifan of China is closing in on winning the FIDE Grand Prix after seven rounds at Sharjah in the United Arab Emirates on September 1. Hou Yifan and Ju Wenjun are jointly leading with six points from seven games. The leaders still have to face each other. The Grand Prix race is only between two players, Hou Yifan and Humpy.

Koneru Humpy who is leading the Grand Prix hit a poor start has recovered and won with Tatiana Kosintseva of Russia in a slightly advantageous rook ending. Humpy is on three points from seven games.

To bridge three points from four rounds is a near impossible proposition. That Humpy has to play a few easy opponents that she can recover completely and wipe the current Elo deficit from this event. Humpy still needs to face Ushenina, Danielian, Ju Wenjun and Zhu Chen.

Harika drew former world champion Ushenina with the white pieces to reach four points. Harika is playing solidly and without risk. The biggest rating gainers are Batchimeg and Ju Wenjun while the biggest rating losers are Zhu Chen and L’Ami. It is a 12-player all-play-all. 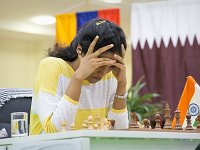 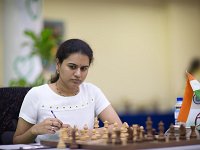