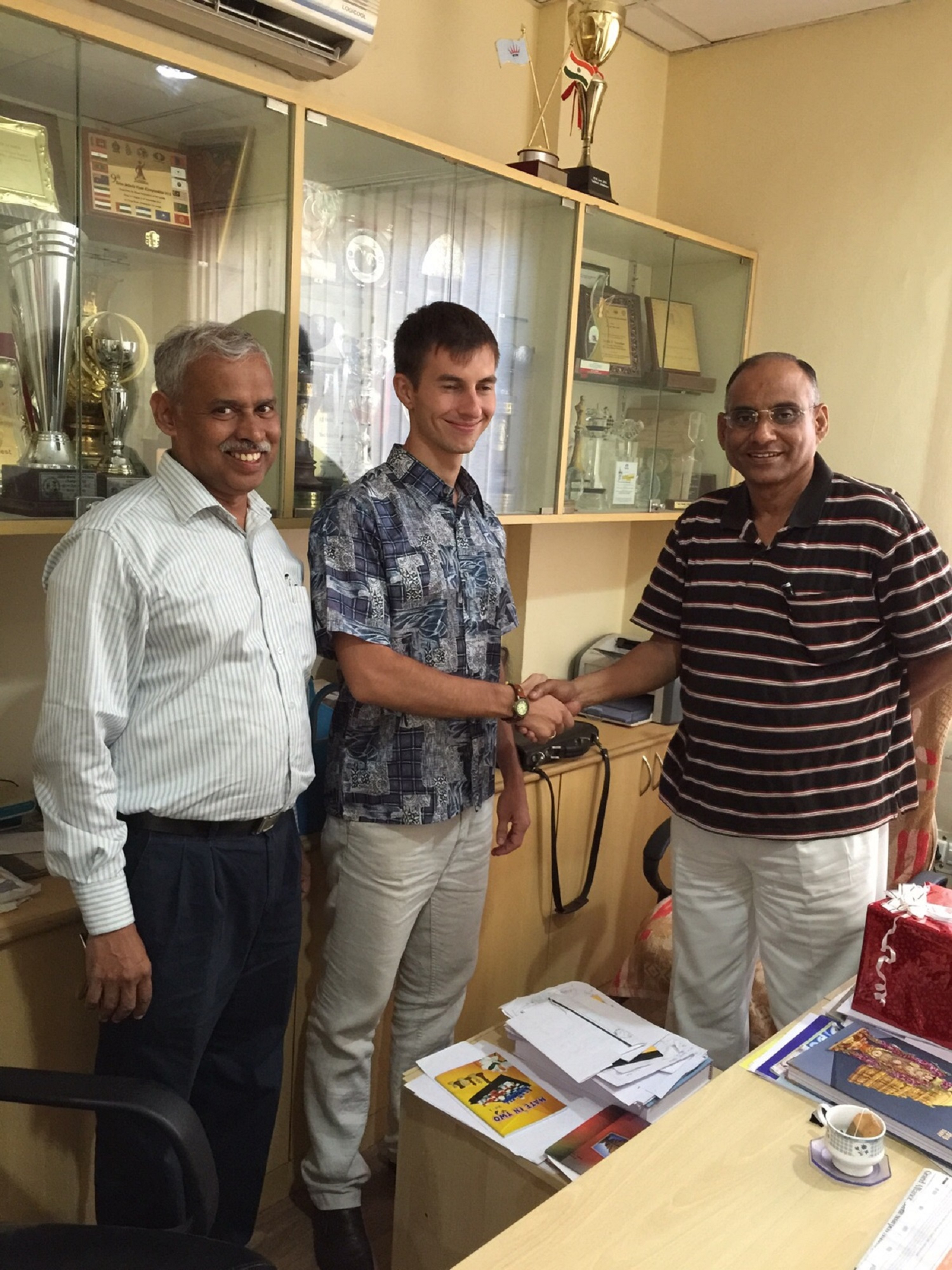 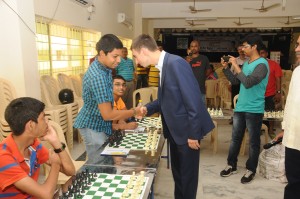 The 1987-born Igor Smirnov of Ukraine is on a private tour of India, the motherland of chess. It is widely accepted and believed that chess was invented in India and for this reasons many in Europe – where chess thrives – love a visit to India. Smirnov is the founder and CEO of the Remote Chess Academy. 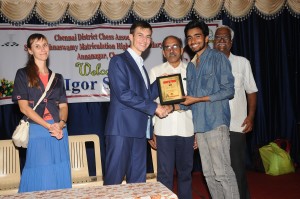 His enormous training skills and experience has helped him attract a huge gathering in Vellore and Chennai and other parts of the country. Smirnov continues to unlock treasures of chess knowledge on young chess aficionados in the Seminars and Question and Answer sessions.

Nine players, Yogit, Ravindran, Sivamahadevan, Vignesh, Harshvardhan, Jaswant, Abhinandhan, Balaji, Karthik drew Smirnov in the simultaneous display out of the enthusiastic 40 players who gathered to play him. The spectators were none other than the parents of these players. 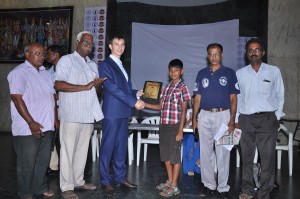 The Chennai District Chess Association used the visit by staging the show at the M A Krishnaswamy School, Annanagar, Chennai on October 18, 2015. Visits by Soviet Grand Masters used to be irregular but about once every few years at a time India did not have Grand Masters. After Viswanathan Anand became a Grand Master in 1987, these visits of the Soviets had stopped.

Most of the top coaches of the world travel with successful players. Some years back, Georgian Grand Master Elizbar Ubilava, the noted former trainer of Anand was in Chennai accompanying Parimarjan Negi as a trainer in the National Premier that took place at the M.A.C. Stadium in Chepauk. 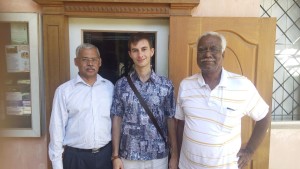 Igor Smirnov later called    on D.V. Sundar, the organisational head of Indian chess who serves as the Vice President of the International Chess Federation, FIDE.

V.Hariharan, former National Premier player and Honorary Secretary of the All India Chess Federation, the functional head of Indian chess was also present.

Smirnov took up the subject of  “The Right  System of Thinking” which is, in essence, the most useful topic for a chess player.  In this seminar, he explained the various methods and schemes adopted by top players while playing a game.  He was very specific as to which details to avoid during a game and what are the other little details one should take care of.  The whole session was very instructive as well as interesting as the Grandmaster was answering the questions thrown upon him by the enthusiastic bunch of upcoming players.

Indian children are willing learners. Present day parents have big budgets and are in no way inferior to those of advanced countries. With our own home Grand Masters like Dibyendu Barua and R.B. Ramesh starting their own academies the fascination for overseas training does not arise. However, parents explore at what is new and see if their ward can learn that extra bit to edge out the rival in a competitive skill game.

The Soviet teaching system is however special and systematic. It has produced world champions and stood a test of time. Igor Smirnov would certainly offer Indian chess players something unique. Many Indians train in Russia and Ukraine and also online. When a well known trainer visits India, the benefit is several times more.