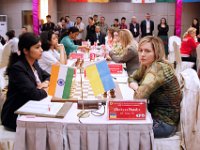 Padmini Rout shocked former world women’s champion Anna Ushenina in a brilliant rook and minor piece ending to give India the lead. However, India lost on the fourth board for the third straight time after Soumya Swaminathan lost to Natalia Zhukova in a rook ending. The lead was neutralised and the match ended in a draw in the third round of the World Women’s Team Championship. 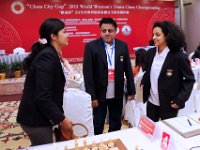 Padmini won a bishop and soon the game with some deft play. Soumya Swaminathan let Ukraine breathe easy by losing her match against Natalia Zhukova.

This happened after the Muzychuk sisters, Anna and Mariya had drawn Humpy and Harika. Humpy sacrificed her queen to draw early by repetition and Harika drew Mariya with the white pieces. India held the former Chess Olympiad champions Ukraine to a creditable 2-2 draw.

India is in ninth place with two draws and a defeat. China and Kazakhstan share the fourth place with three points. Six rounds remain to be played in this 10-nation tournament.