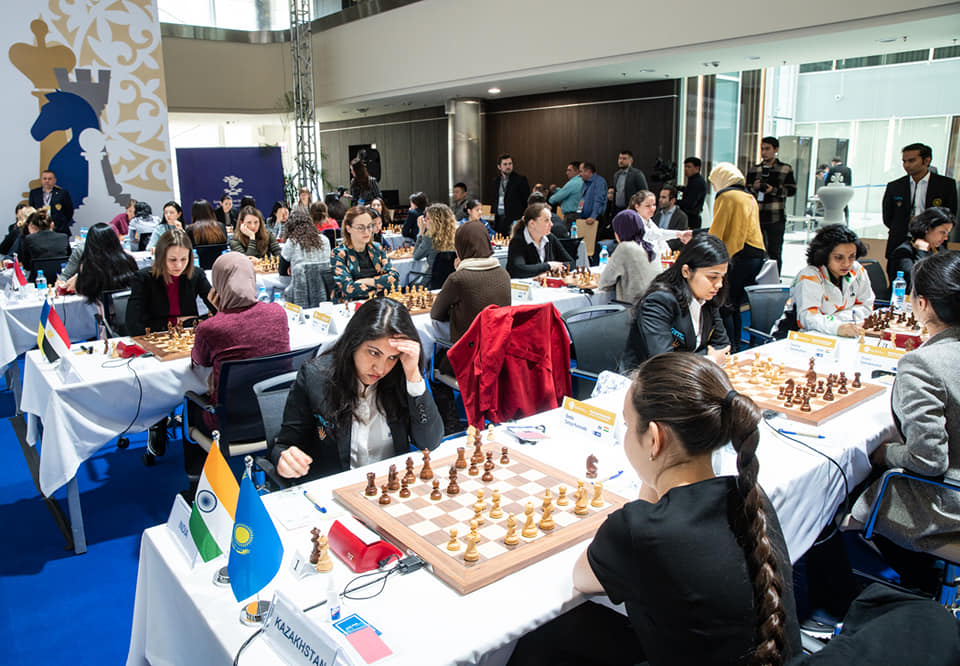 The FIDE World Team Championship is a 10-team round-robin tournament which is taking place from 5-14 March in Astana, Kazakhstan. Matches take place on four boards, with 2 match points for a win and 1 for a draw. The Indian Women’s team comprises of the following players:- 1. IM Eesha Karavade, 2. WGM Soumya Swaminathan, 3. IM Padmini Rout, 4. IM Tania Sachdev, and 5. WGM Bhakti Kulkarni.

In the first round of the championship, Team India faced Georgia. IM Tania Sachdev was given rest for the first round. Considering ratings of the teams, Georgia is higher seeded than our team. We got good positions out of the openings on all the boards. Bhakti was the first one to finish the game. She drew with the black pieces against IM Salome Melia on board 4. On the first board, Eesha had a slightly better position against GM Bela Khotenashvili, but the game went into a drawish endgame and ended in a draw. With the match tied on 1-1, we were in driving seat as both Soumya on Board 2 and Padmini on Board 3 had better positions. But unfortunately, Padmini lost the thread of the game and ended in minus position. In the end, Padmini lost on board 3 but in a thrilling game, Soumya managed to secure a crucial victory in her game equalizing the score to 2-2. So, the match with Georgia ended in a tie with a score of 2-2.

In the second round of the championship, we faced the local favorite Kazakhstan. IM Tania Sachdev was given rest for the second round. Position resulting out of the openings on boards 1 and 4 turned out to be favourable for us. Eesha got a comfortable position with the black pieces while Bhakti was slightly better with the white pieces. But unfortunately, Padmini was caught off guard by her opponents preparation. She was behind on time while her opponent had a huge time advantage. Her position deteriorated slowly and she ended up in a losing position in the middlegame. However she kept fighting as well as she can and kept the game going which is a very important thing to do in a team championship. Bhakti on board 4 played a very nice game and managed to score the first win of the match, giving India a one point lead. Padmini went down fighting on the third board. With the score tied 1-1 Soumya and Eesha were both on the defending side on boards 2 and 1 respectively. They fought and defended very well. With some luck on our side the match ended in a draw with 2-2 with the local team Kazakhstan.

Grandmaster Swapnil Dhopade is the Captain of Indian Women’s Team.