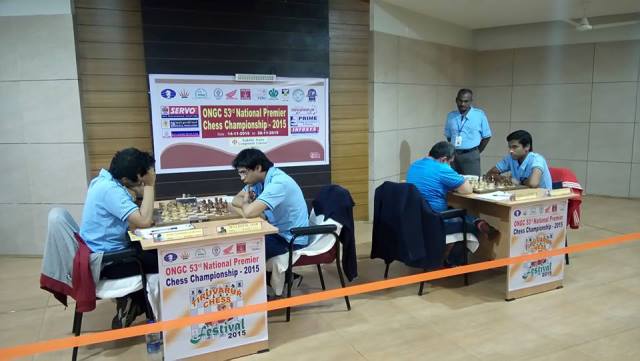 Leaders, Karthikeyan Murali of Tamil Nadu and Vidit Gujrathi of Petroleum Sports Promotion Board maintained their lead with eleventh round draws in the ONGC National Premier Chess Championship at Tiruvarur in Tamil Nadu on November 26, 2015.

Joint leader Vidit and Neelotpal Das drew an interesting game featuring three exchange sacrifices. Neelotpal who had the rook for knight, had to repeat and take a draw after 49 moves.

Former champion Abhijit Kunte and the other joint leader Karthikeyan Murali drew in 30 moves after reaching a level bishop ending. Pieces were exchanged off at regular intervals through the king file. It was the least interesting game on the day. In case of a tie for the first place, Karthikeyan has an upperhand in the tie-break as he had defeated Vidit in the mutual encounter.

Praneeth Surya sacrificed a bishop and defeated Venkatesh in a surprisingly easy manner in 42 moves. Praneeth needs a win in the twelfth round against Rathnakaran for a GM norm.

Swapnil Dhopade and P Karthikeyan maintained their respective boundaries and drew in 28 moves. Karthikeyan needs two wins against Arghyadip Das and Sethuraman for his GM norm.

Arghyadip Das’ risk level was higher than required and he suffered on account of it. Defending champion Sethuraman who enjoyed extra material planned his defence well to win in 51 moves with the black pieces in a closed Sicilian.