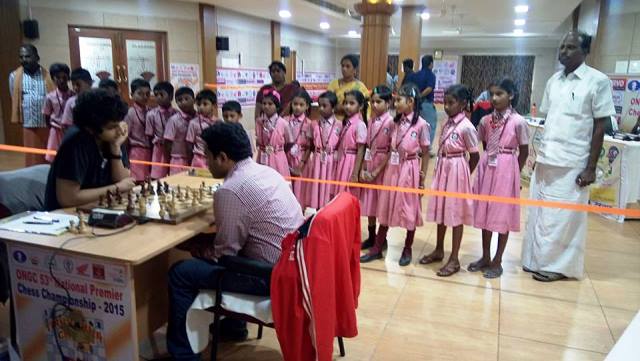 Karthikeyan Murali of Tamil Nadu used a small advantage to defeat Swapnil Dhopade of the Railways and snatch a half point lead at the end of the twelfth and penultimate round of the ONGC National Premier Chess Championship that is taking place at Tiruvarur in Tamil Nadu.

Karthikeyan will need a draw to win the title as his tie-break score is better than Vidit Gujrathi. Karthikeyan Murali faces Arghyadip Das with black and Vidit takes on Shyam Sundar with white. Sethuraman plays P Karthikeyan with white.

Karthikeyan leads with 8.5 points and is followed by Vidit 8, Sethuraman 7.5 and P Karthikeyan 7. The prestige of winning the title should be better than the Rs.2.5 Lakh first prize.

In a rook and minor piece ending that emerged from a Caro-Kann defence, advance variation, Karthikeyan Murali, used the bishop to win a pawn on the queen side. He used the passed pawn to collect the black knight. The win came in 55 moves. Swapnil was outplayed by his teenaged opponent.

Vidit Gujrathi had a long 79-move fighting draw with the black pieces. He was also a bit unlucky not to have won as he was two pawns ahead at one stage. Deep Sengupta fought hard with the double bishops and drew the game with dour defence.

Praneeth Surya’s dream of making a Grand Master result in this event ended when Rathnakaran scored an attacking win in 33 moves from a French defence black side.