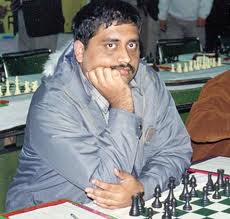 Laxman, Sethuraman Shine In Round Three
By Arvind Aaron

Round three recorded four draws but R.R. Laxman and Sethuraman did well to record their maiden victories in the South Indian Bank – CMS College National Premier Chess Championship that is taking place in Kottayam on December 7, 2014.

Five players continued to lead with Sethuraman beating Sahaj Grover and wresting his place in the leader board. Sethuraman, Deepan, Lalith Babu, Karthikeyan, Deep Sengupta are leading with two points from three games. Ten rounds remain to be played. This long event runs until December 18.

Sethuraman faced the Worral attack of Sahaj Grover well and obtained a comfortable position with the black pieces in a Ruy Lopez opening. Pressed on all corners, Sahaj gave up two pieces for a rook. Sethuraman went on to win the game in 41 moves.

Laxman started with a defeat, a bye and now registered a resounding victory. In a queen and rook ending, Swayams Mishra drifted on move 32 and the Chennai player was able to penetrate with his queen to win in 45 moves.

In a well fought game, Karthikeyan handled the tactical shots of Deep Sengupta well to defend well and draw an opposite colour bishop ending in 63 moves.

Deepan as white and Lalith Babu drew in 37 moves from a Caro-Kann defence advanced variation. In a queen and rook ending, they repeated the position and shared the point.

Kunte drew in 35 moves with ease against Rajesh using the Bogo-Indian with the black pieces.

Shyam Nikil opted for the anti-king’s Indian defence set up with white and accepted the draw offer from Girinath on move 27.

With three players, Kunte, Laxman and Vidit having received the bye the standings may not be the perfect place to see who is doing well. Karthikeyan has started well and is gaining over eleven Elo and Swayams Mishra is not had a good start having lost over twelve Elo. But it is early days for the rating check.