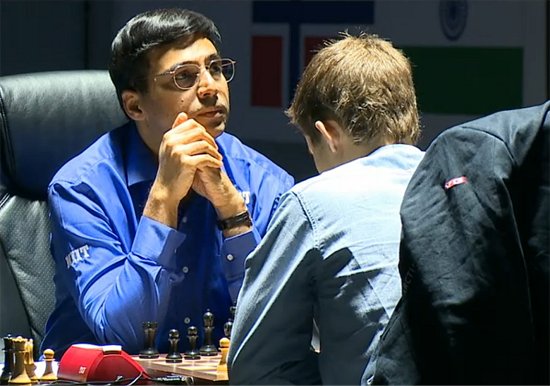 In a see-saw sixth game, Magnus Carlsen of Norway blundered his centre pawn on move 26 and the challenger Viswanathan Anand failed to seize the opportunity. A rare event for a world championship match.

White positionally obtained a big advantage and defeated black in 38 moves. At the half-way stage, Carlsen leads by 3.5-2.5 with another six games still to be played.

Sunday is a rest day and game seven will resume on Monday with Carlsen sitting behind the white pieces yet again. The first player to reach 6.5 points will win this match.

The double bishop and rooks helped white to keep black on the defensive. While unleashing a planned defensive move, Anand forgot about this “gift” that was waiting for him in the middle of the board. Had he played 26…Nxe5, history of world chess could look different.

Carlsen opened with the king pawn and Anand chose the same Sicilian Paulsen. Carlsen came prepared to play the Maroczy bind and it suited him sell. Despite the blunder by both players, the Norwegian was able to keep the slight advantage long.

After black’s pawns fell on the king side, white was in the drivers seat and opposite colour bishops could not do much help for the Indian. Carlsen believed that had black taken the pawn, he would have continued in the “worse” position and it was not yet a “lost” position.