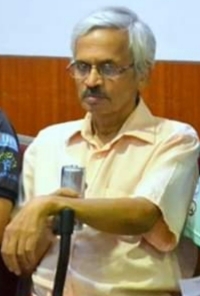 Former National A player, veteran International Arbiter and well-known organizer from Maharashtra,  Moreshwar Dattatrey Bhagwat (63 years) took last breath today in Pune after a long illness.  He is survived by a wife and 2 daughters.
Bhagwat was fondly known as “MD” in the field of Chess.  A former bank employee was involved in Chess as various capacities. He was awarded the prestigious “Shiv Chhatrapati award” of Govt. Of Maharashtra.
He has guided and encouraged many arbiters, organizers, players to continue involvement in sports, he believed in transparency and promoted the sport selflessly for over 4 decades.
He was office bearers of Maharashtra Chess Association since 1985. He was Executive Committee member, Joint Secretary, Secretary and Treasurer of MCA.
Hats off to his dedication, we will miss you MD.
Vijay Deshpande
Hon. Secretary
All Marathi Chess Association