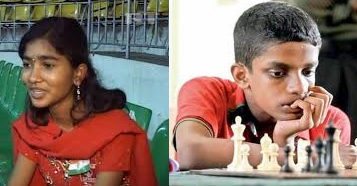 This 44th edition of the National Junior Chess Championship was a little special since four International Masters took part in this event for the first time. But competition was so fierce that none of them finished in the top two.

All the players were defeated. It was a 11-round Swiss, so there are no knock-outs in the real sense. It was indeed held in a Boxing Stadium at Balewadi in Pune. The top three seeds suffered final round defeats and the fourth seed, S.L. Narayanan from Thiruvavanthapuram won his maiden National title.

For S.L. Narayanan it was his first National title. He is trained by IM Varugeese Koshy at Chennai. “Since Koshy recently moved to Pondicherry, I have not come to Chennai,” confessed Narayanan. He already has five International Master norms and one can expect him to receive the title in a few months.

Narayanan finished with a terrific 5.5/6 score after losing a game to Parag Ritviz of Goa earlier. This event was organised by the Pune Chess Circle from July 10-18, 2014 in a successful manner. The leading games were broadcast live on www.monroi.com and there was a link from the All India Chess Federation website www.aicf.in

Local Pune boy Abhimanyu Puranik shocked top seed and world under-16 champion Karthikeyan Murali of Chennai in the final round. Second seed Aravindh Chithambaram was brought down by former Indian Premier champion IM G Akash in an unusual ending, Akash had three pawns and a bishop to a sole rook of IM Aravindh before winning. Odisha’s Siddhant Mohapatra won against IM Shardul Gagare.

Harsha Bharathakoti defeated Fenil Shah in the final round to take the second place while Akash took third place. The top finishers will represent India in the 2015 World Junior and World Junior Girls Championships.

Title excitement was present when the last round commenced with Aravindh and Narayanan starting on the same eight points. Aravindh lost and Narayanan won and the title was decided right there. Narayanan gains close to five Elo points from this event. Similarly, in the girls’ event, J Saranya and Michelle Catherina had the same eight points. Saranya won while Michelle only drew and the title was decided clearly.

J Saranya of Chennai who had won plenty of National age group events added a new bigger title to her existing list of achievements. She gains over 28 Elo from this contest. With G.K. Monnisha third, the players from Tamil Nadu swept the podium. Saranya had been with the famous Velammal School before joining college. She is a product of the Bloom Chess Academy in Chennai.

The idea of staging this event in Pune should be commended since our players would be competing in the World Junior from October 5-20, 2014 in this city.