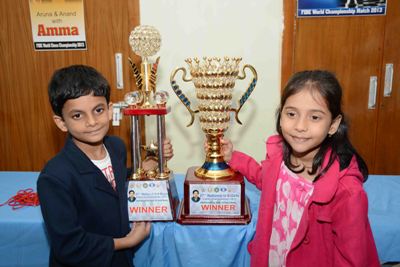 Nihal Sarin of Kottayam, Kerala and Divya Deshmukh of Nagpur, Maharashtra won the National Under-9 Chess Championships that concluded at the Nehru Stadium in Chennai on November 14, 2013.

The closely fought 199-player Under-9 championship saw the top four players remaining undefeated. The top four places were taken by players from each of the four southern states, Kerala, Tamil Nadu, Karnataka and Andhra Pradesh. The winners of both the Open Under-10 and Girls Under-10 sections started as second seed.

Divya Deshmukh recovered from an early loss to Chinnam Vyshnavi and won by a comfortable one point margin. Divya had previously won the National Under-7 girls’ championship and the Asian Under-8 Girls’ championship.

The top finishers will represent India in the World Under-10 Championship at Durban in South Africa in 2014. This event is also part of the FIDE World Chess Championship festival to allow young talents to watch the ongoing Anand v Carlsen match.