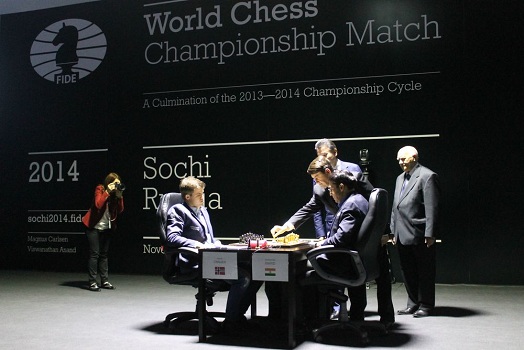 The opening game between Anand and Carlsen ended in a fighting 48-move draw by repetition at Sochi, Russia on November 8, 2014. Carlsen will make the first move in the second match game on Sunday. Eleven games are left in this world chess championship 12-match series at a neutral venue.

The players were left with a queen, rook and equal pawns when draw was agreed upon due to repetition. Carlsen had been trainer of Anand during the Kramnik match and knows many things about the preparation of the Indian. Also, Nielsen, had worked with Anand over a long period of time in the post Ubilava period and today he is rendering his services to a fellow north European, Carlsen.

Game one started with former champion Anand opening with 1 d4. Quickly, the players ventured into a Grunfeld defence, exchange variation. A line, Carlsen had played some point in time during his career. Anand also had played the Grunfeld defence in his matches against Yusupov at Wijk aan Zee in early 1994 and Oleg Romanishin at New York June 1994. White’s fifth move option is a less tried variation. White never got the attack going. 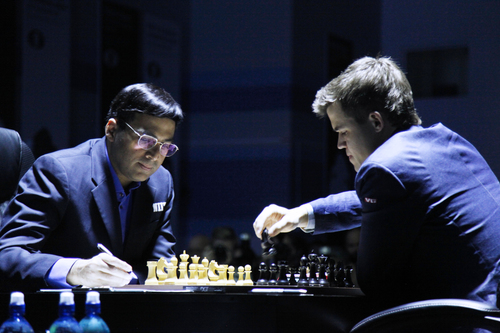 This game had major inaccuracies from both sides. Anand’s Rhe1 has been termed a “blunder” by many grandmasters. Carlsen returned the favour as the game slipped into a drawish queen and rook ending. It was not an interesting game as attack and counter attack which laces Grunfeld opening lines were missing. The choice of Grunfeld by Carlsen should have made commentator Peter Svidler feel at home.

At one stage, Anand gained an advantage on the clock but slipped close to move 40 and had to made moves quickly. In the second control, Anand was down on time until Carlsen had long thinks and finally knew that the game was only draws. During the game, Caruana said only a handshake and signature can confirm a game as drawn. Ten years ago, such positions would not have tried longer by players and would have drawn by move 30 which is the stipulated requirement by FIDE.

Some say every draw makes it easier for Carlsen. But every draw, Anand gains rating. The Indian is 71 rating points lower and a 6-6 score would help him to gain considerable rating. Tie-breaks should help the Indian. Anand had defeated Gelfand in world championship tie-breaks in 2012 but lost to Karpov in the 1998 tie-breaks.

Seventy percent of the games between Grand Masters are drawn. These two players have played 30% decisive games too. In rapid chess, Anand beat Carlsen at Dubai earlier in June this year. Applying the same percentage, we can see about four decisive games in this match. Andrei Fillipowicz was the chief arbiter and one of the roles for them was to check the players with metal detector before the games. 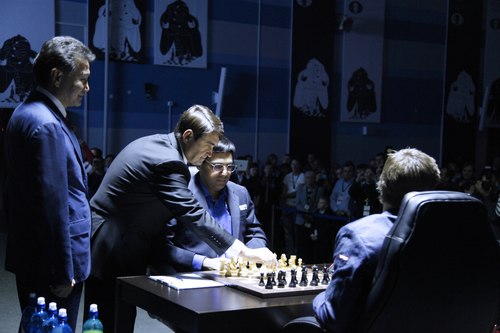