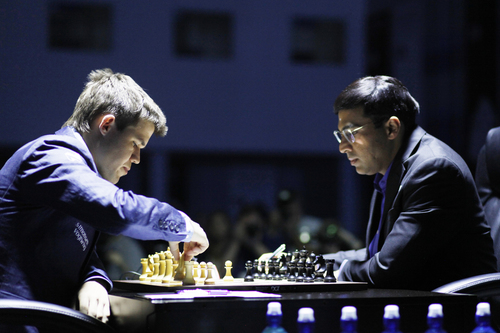 Carlsen leads the 12-match series 1.5-0.5 with ten games still to be played. Anand will play white in the third game on Tuesday. Monday is a free day.

Carlsen played 1.e4 and Anand responded with the Ruy Lopez, Berlin side variation. The main line Berlin was seen in both colours during the Chennai match last year.

The Berlin variation became popular for black to defend after Kramnik used the black side successfully in the London match against Kasparov in 2000. 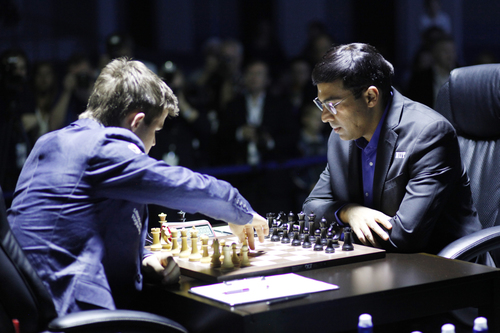 Carlsen went for a king side attack and Anand started to drift from move 19 when he could play Rd7 instead of Ng6. The resultant queen and rooks middlegame favoured white.

Anand final blunder on move 34 helped Carlsen to wrap up the match by doubling on the seventh rank. Black could defend 34…Qd2 allowing white to enjoy an advantage.

The players attended the press meet at the end of the game. Today, I did not play well after gaining an advantage, said Carlsen.

“No, I played for myself,” said Carlsen when asked if this game was a gift to his father for father’s day.