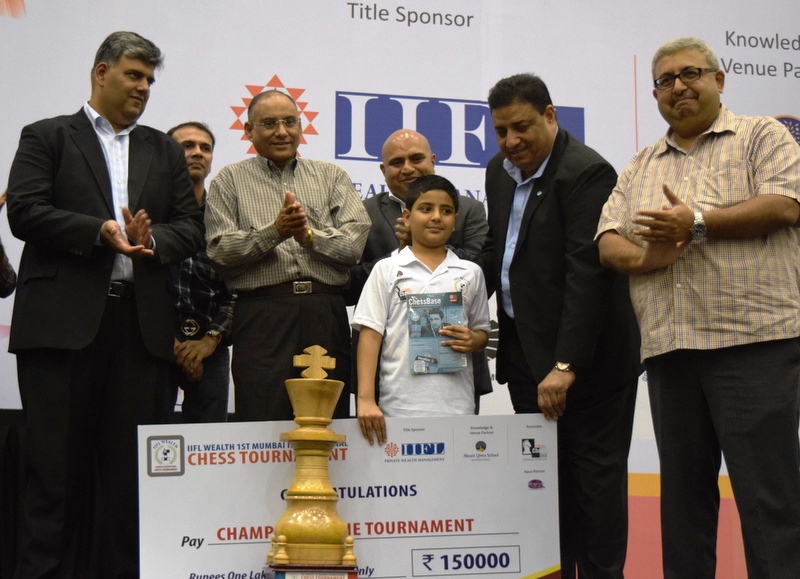 Nagpur boy Sadhwani Raunak (7.5) emerged Champion on better tie-breaks, after the 9th and final round of the IIFL Wealth Mumbai International Junior Chess Tournament 2016 that concluded at Mount Litera School International, Bandra (East), Mumbai. Tying for the top spot at 7.5 points with Sadhwani Raunak were Rahman Mohammad Fahad (Ban) and Aditya Mittal respectively. Out of total cash prizes for Rs 750000, Sadhwani, Rahman and Aditya would receive cash awards of Rs. 150000, Rs 120000 and Rs 100000 each.

Sadhwani came up with an attacking display in a Sicilan game that lasted 30 moves. Following him with an equally quick win was Rahman Mohammad Fahad (Ban) who accounted for Ragav Dhanush.

The top board game between Gukesh D of Tamil Nadu and Aditya Mittal of Maharashtra, went for a marathon five hours. The Sicilian game saw both the young stars going all out for win. Aditya sacrificed an exchange for initiative and looked all set to queen his “b” pawn. Gukesh match his Mumbai opponent, saving himself in the nick of time with accurate moves. The game was drawn in a queen and bishop ending by 58 moves, which resulted in a three way tie on top.

The game of the day award – ChessBase gift voucher – for the round 8 & 9 went to Gukesh D and Rahman Mohammad Fahad (Ban) respectively. Best game of the tournament prize went to Sadhwani Raunak.