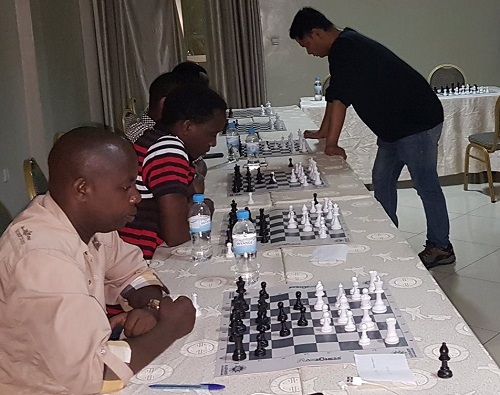 By Arvind Aaron
Delhi Grand Master Sriram Jha gave a simultaneous display at Kigali in Rwanda on June 15, 2017.  Sriram Jha, won 6-0 and the opponents were no match for the 1976-born LIC star.  Rwanda is in Central-Eastern Africa and about the size of the Indian state of Manipur. Kigali is the capital and has a population of one million people. English-French and local languages are commonly spoken in Rwanda.
Sriram Jha had played in the World Cup of 2009 by winning the Asian Zone 3.2 Championship. Sriram Jha’s peak rating is 2511 and he is married to IM S Vijayalakshmi of Chennai.
There are 43 nations in the African Zone of FIDE. Rwanda comes under Zone 4.2. Rwanda has three Candidate Masters and 92 players in the FIDE rating list.
Something wonderful about this country is the weather. It never crosses 30C and never gets too cold either. It has good altitude and is south of  equator. The best time to visit is June to September each year. Rwanda Air offers direct flight from Kigali to Mumbai (seven hours non-stop).
Pic Source www.fide.com