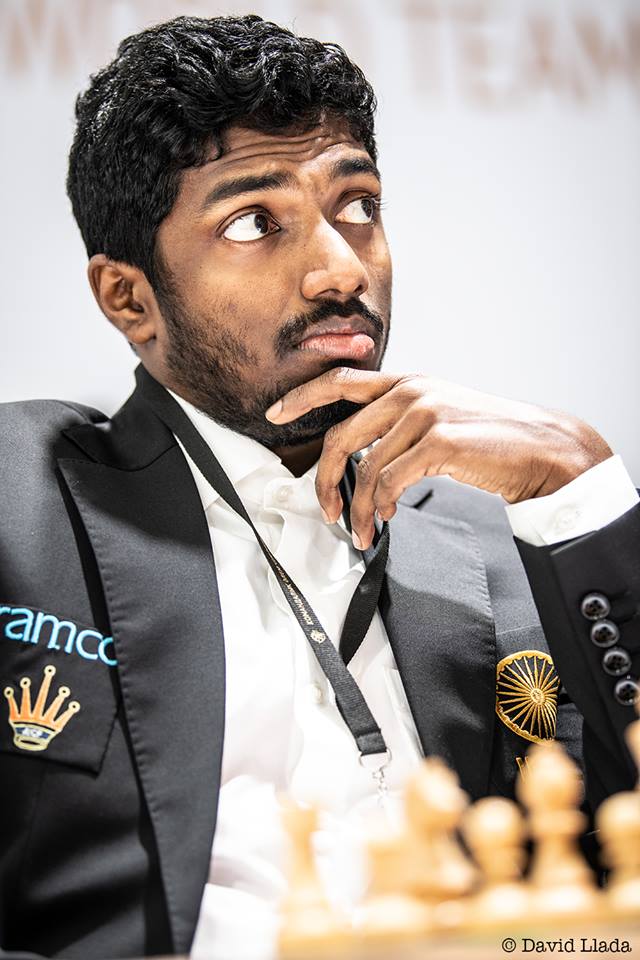 The Hound of the Baskarville gives India a solid start

Report by GM Srinath Narayanan; All Photos by David Llada

About a century ago, Sir Arthur Conan Doyle painted the imagination of the readers with a fearsome beast found near a military base near Dartmoor. Victims would be found dead with an expression of horror in their face, with the footprints of a gigantic hound found near the scene.

While it remained a mystery if that beast actually did exist, there is no mystery about the beast running loose in Astana, Kazhakstan. GM Baskaran Adhiban scored two resounding victories in the first two rounds of the World Team Chess Championship. Having the White pieces on board one, he dispatched GM Nils Grandelius and GM Parham Maghsoodloo of Sweden and Iran respectively.

India had a comfortable 3.5-0.5 victory against Sweden. GM Ganguly opened the scorecard for India with a crushing attack against GM Axel Smith. Ganguly out-prepared his opponent and put him in an uncomfortable situation. GM Smith couldn’t withstand the pressure and wilted after 32 moves.

GM Sasikiran held a solid draw on the second board against GM Erik Blomqvist. Lagging one point down and with things not looking rosy on the 4th board, the pressure got to GM Grandelius. The position looked difficult as it is, but 27…Ne7 was a little too much. After 28.Qg3, the rest was just a formality.

In the meanwhile, GM Sethuraman played a very solid game. His opponent, IM Johansson, Linus sacrificed a pawn, but didn’t follow up in the most accurate manner. GM Sethuraman just netted the pawn and converted smoothly. 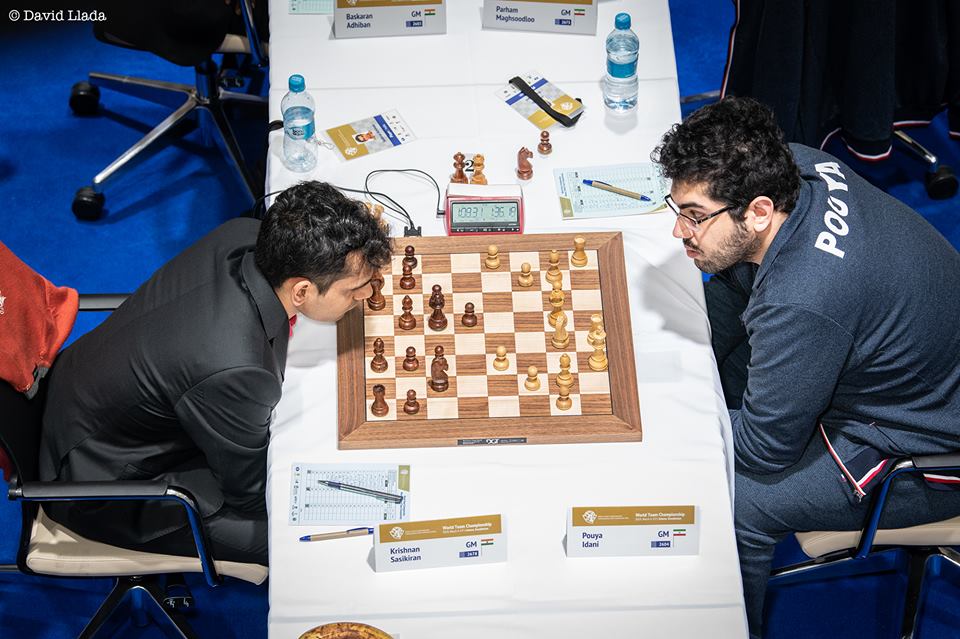 India had the better of a 2-2 draw against Asian Champions Iran. The games felt intense right from the beginnning. While India held the better position on board 3, in GM Ganguly’s game against GM Tabatabei, India were under a lot of pressure on board 2 in GM Pouya-Sasikiran. The trend went on for the first 2.5 hours, when GM Adhiban turned the beast mode on and was the first to score a point. It looked to me like Black was alright after 20 moves, but five moves later, the game was suddenly all over.

In a Scotch game, GM Sasikiran came under a lot of pressure right from the start. Despite putting up resolute resistance, he ran out of time after 32 moves in a position that was already lost. GM Sethuraman stood strong and solid against Iranian wonderkid GM Firouzja Alireza. Whilst White kept pressure throughout the game, he couldn’t break through GM Sethuraman’s defenses. The game concluded in a logical draw after 39 moves.

GM Ganguly held an advantage against GM Tabatabei right from the opening. However, he was quite unlucky to miss out on the full point. The position looked terrible for Black optically, but defensive resources kept showing up. However chess is a very resourceful game, and sometimes luck becomes a pivotal factor for the victory. This brought a logical result of 2-2, although India can claim to be the psychological victors.