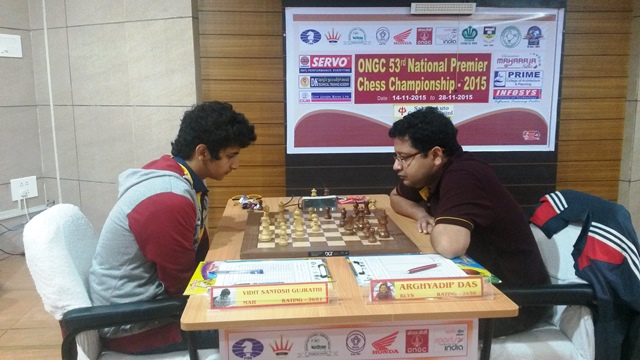 Vidit Gujrathi of Nasik widened his lead to a full point in the ONGC National Premier Chess Championship that is taking place at Tiruvarur in Tamil Nadu on November 22, 2015.

Vidit beat Arghyadip Das of the Railways to move to 5.5/7. All other games ended in draws. P Karthikeyan is in clear second place with 4.5 points. Four players share the third place on four points. It includes M Shyam Sundar, Swapnil Dhopade, Arghyadip Das and Karthikeyan Murali.

The first prize is INR 250,000 and the total prize fund is Rs.10 Lakhs. The last prize is Rs.20,000. It pays to play chess! The title sponsor is ONGC, and others who support this event are Honda, Sports Authority of India and Kasi’s Inn. It is organised by the Tiruvarur District Chess Association on behalf of the TNSCA and AICF.

Saturday being a free day, players had time to prepare for their Sunday’s games and go all out. But six out of seven games ended in draws.

The 14-player all-play-all event still has six rounds to be played. Vidit is chasing his dream of his maiden National Premier title.

Praneeth Surya completed an IM norm after making a draw with white against Karthikeyan Murali. After more rounds, he will probably extend his nine game norm to a 11 or even 13-game norm. Praneeth is a certain Grand Master material and his strength is taking risk and fishing in sharp play.