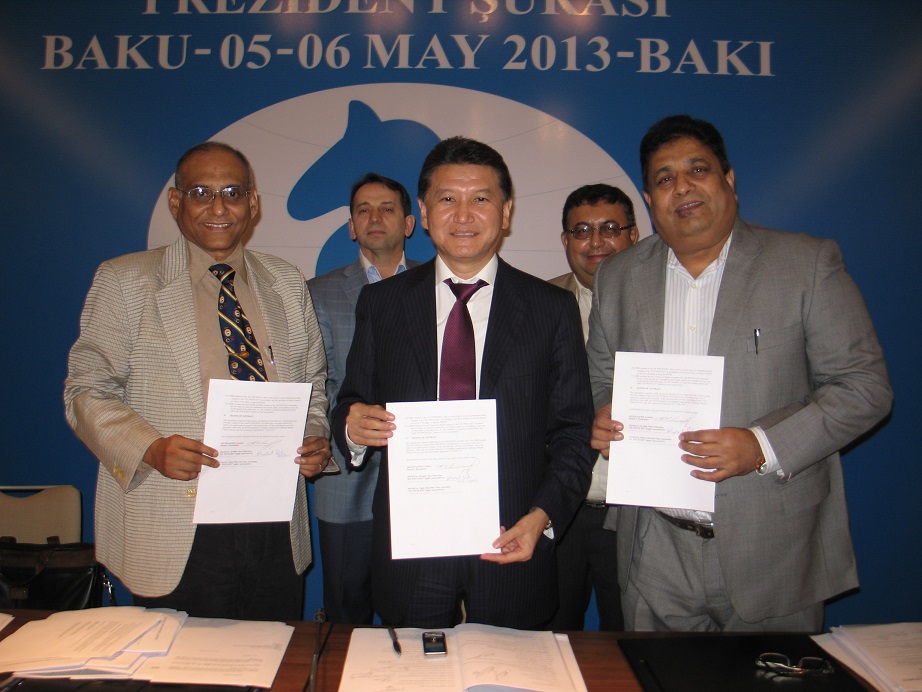 The FIDE Presidential Board which met in Baku, Azerbaijan over the weekend confirmed Chennai as venue for the World Chess Championship match between title holder Viswanathan Anand and Magnus Carlsen of Norway.

Chennai becomes the first Indian city to stage this event. The sponsor is the Government of Tamil Nadu who have offered Rs.29 Crores for this contest which runs from Nov 6-26, 2013.

It will only be the fourth time that this mega title event held since 1886 (unofficially since 1834) will be staged in Asia. Baguio 1978, Jakarta 1993 and Tehran 2000 are the previous cities which staged the event from our continent.

This signing between the Indian side and FIDE has sealed the match in favour of holding the event at Chennai. FIDE President Kirsan Ilyumzhinov has signed the document awarding the match to Chennai after the FIDE Presidential Board approved the MOU signed at Chennai last month. India’s D.V. Sundar, Vice President of FIDE, AICF Honorary Secretary Bharat Singh, AICF Honorary Treasurer R.M. Dongre were present at Baku.

The year 2013 will be an exciting year for Indian and Asian chess. Since Anand won the title first in 2000, India had made huge progress. If you point your finger on any given date on the calendar, chances are that three Indian events would be running at that time!

In terms of players in the FIDE rating file, India is significantly ahead of Germany and Russia, the key nations. India are only behind France and Spain but we are well placed to overtake these European nations as the growth in numbers are higher in India than in both these nations.

Having sealed the match, the organising committee of the World Chess Championship can now finalise venues, hotels and chart out other programmes to make this festive and the best ever organised event.

The best of 12-match would start from Nov 6 and would run until Nov 26. In case of a tie, the match would be decided in the rapid playoffs like it happened in Moscow in the Anand v Gelfand match.