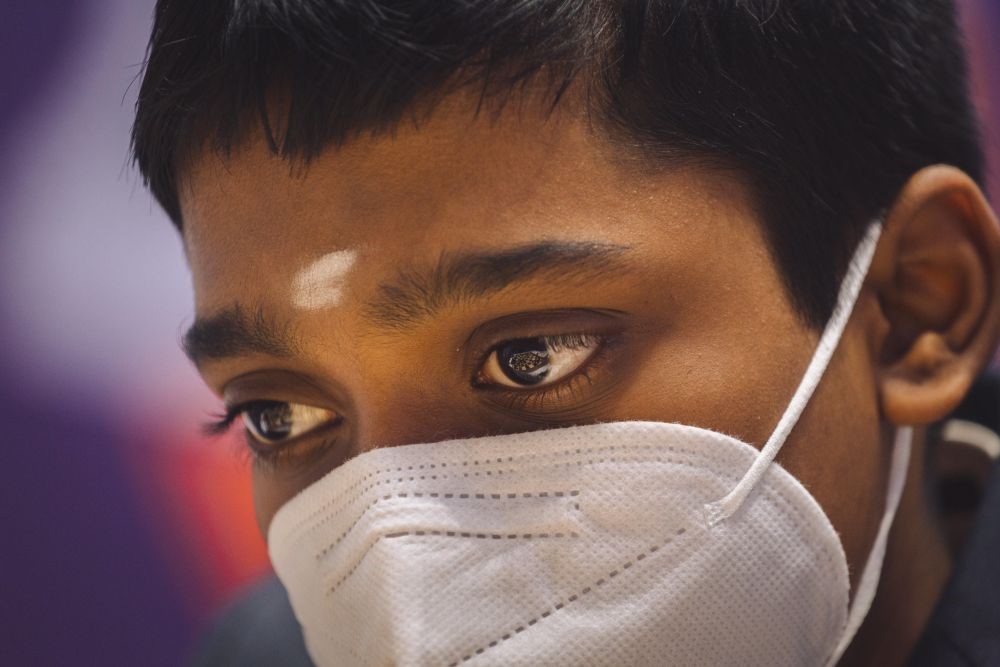 Adhiban continued his fine run to blank the Cuban GM Neuris Delgado Ramirez 2-0 and march into round 3 royally. Adhiban has 4 wins out of 4 games so far. Praggnandhaa defeated the more experienced Armenian GM Gabriel Sargissian with an identical scoreline to secure his place in round 3. Pragg’s play and performance was commanding and remarkable.

The slightly older Nihal Sarin was the third Indian to join round 3, as he defeated the higher ranked and more experienced Russian GM Sanan Sjugirov with a convincing win with the Black pieces. Nihal won with a scoreline of 1.5-0.5. India’s most experienced and highest ranked player in the event, Harikrishna also won with an identical scoreline of 1.5-0.5 over the Cuban GM Quesada Perez and advanced to round 3.

In the tie-breaks, Vidit had to overcome some stiff resistance from the Brazilian GM Alexander Fier, but managed to come up ahead 2.5-1.5. Similarly, Gukesh offered fierce resistance against the World No:30, Russian GM Daniil Dubov. In some ways Gukesh seemed like a younger version of his world-class opponent. However, Dubov managed to prevail 2.5-1.5. The decisive games in both the match ups were decided by the Catalan opening.

Iniyan had a tough match against World No:34, Russian GM Evegny Tomashevsky. Iniyan lost 2-0. In the Women’s section, Harika led the charge once again, winning 2-0 against Indonesian IM Medina Aulia Warda. Although Medina tested negative for Covid, as a precautionary measure she withdrew from the tournament as she had come into primary contact with some players who had tested positive. Harika won the game one convincingly and won round 2 by default to advance to round 3.

Padmini had a tough exit from the tournament against Iranian IM Sarasadat Khademalsharieh. The match went till the tie-breaks and Padmini had good positions in all the games, but Sara prevailed in the high-pressure moments. Bhakti had a tough match against Russian WGM Natalija Pogonina. The match seemed even for most parts, but Pogonina prevailed in the second game to take the match 1.5-0.5. Vaishali had a very interesting duel against Georgian GM Bela Khotenashvili. The match was close and the 2-0 scoreline by which she lost doesn’t quite justify the closeness of the contest.