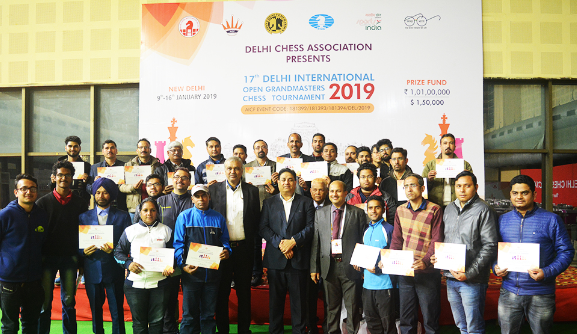 The captioned program – a unique initiative of the All India Chess Federation – was conducted at IG Indoor Stadium from 9-13 January 2019.

A total of 44 trainers from various States of India had attended this 20-hour training program, which was conducted over 5-days.

The trainers covered various aspects of chess methodology to be used or training children at schools.

Based on the performance during the seminar, their cv and written examination on 13/09/2018, the committee of the nominated trainers had recommended the award of title ‘AICF Instructor’ to the 44 trainers

The certificate were awarded to the trainers by the Honorary Secretary Shri Bharat Singh in presence of Shri A.K. Verma from DCA, Mr.Prateek Khanna, CEO of Nurtr Group and other officials of DCA.