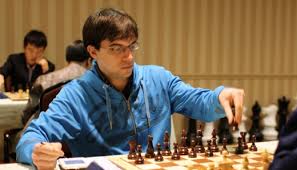 The older players were the only winners on Monday. Former world champion Veselin Topalov of Bulgaria widened his lead to 1.5 points when Russia’s Alexander Grischuk fell after good opening play.

Topalov leads with 5½ points. Anand and Hikaru Nakamura of USA are on 4 points. Three rounds remain to be played. Anand faces Aronian with black on Tuesday.
Anand won with a sparkling bishop sacrifice. The attacking genius from Chennai tore through black’s Sicilian to win a queen for two minor pieces.

Anand and Topalov, the two oldest players in this 10-player field were the only winners. Rest of the games were drawn