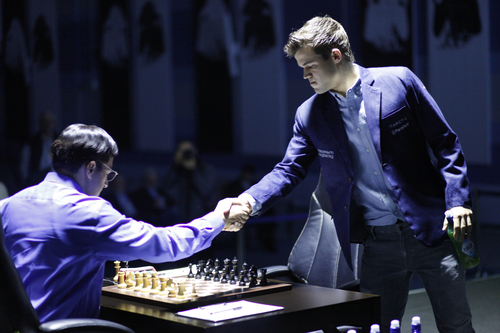 World chess champion Magnus Carlsen of Norway defended well and drew Viswanathan Anand with the black pieces in a rook ending after 32 moves at Sochi, Russia on November 21, 2014. Carlsen leads the series 5.5-4.5 and two games remain to be played.  Anand kept the chances alive with mid-way through but quieter alternatives on turn 24 and 25 allowed black to equalise and walk away with a draw in a double rooks and pawn ending. Saturday is a rest day.

Carlsen plays white in Sunday’s eleventh game and Anand will play white in Tuesday’s twelfth game. The first player to reach 6.5 points wins the match. In case of a 6-6 tie, tie-break will decide the champion. Anand had played in two world championship tie-breaks in 1998 and 2012. 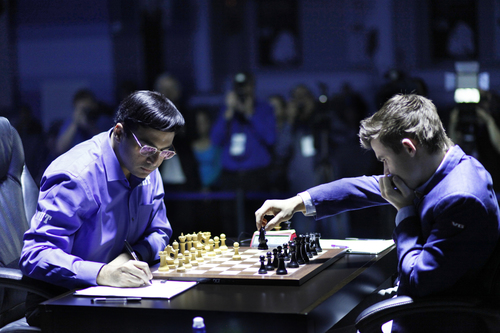 Game ten started with Anand opening with the queen pawn for the fifth time in the match. There was a time when Anand would open religiously 1.e4 every time. Age, surprise factor and the strength of the opponent’s responses go behind the main choices. Since the 1995 match defeat to Kasparov he understood that 1.d4 was a good option and it suited him.

Carlsen returned to the Grunfeld defence he had played in the opening game. Anand did not opt for the exchange variation and Bd2 but went for the Russian variation with Nf3 and Qb3. Carlsen’s 14…Ne4 looked like the new move but easily the players would have seen them in home and onboard thought.

The two commentators of the 2013 match at Chennai, Susan Polgar and R.B. Ramesh got together for analysis in the Internet Chess Club. After move 15, the position is lively and Anand has chances and his fans will like it. Carlsen has some concern. In this match, Anand got the position he wanted and won. In the two positions he did not like he lost, said Ramesh.

“If it is going to be a theoretical battle, Anand has a slight edge over Carlsen since he has worked on openings professionally more than Carlsen and Carlsen’s age,” said Ramesh. 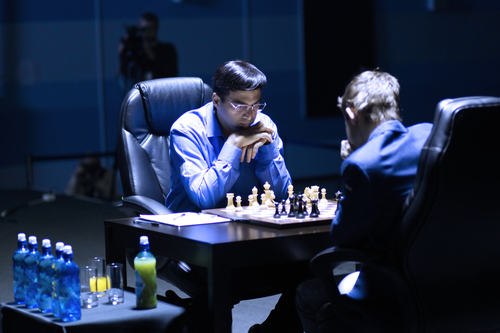 On Qc1 being played, Susan Polgar has its own plus points for white. The computers had predicted d6 at that juncture. Ramesh said, he worked very closely with the Indian team at the Tromso Olympiad as a trainer. “I was proud of my computer as it has i7 computing power. But the entire Indian team had powerful computers not available in the market and they were custom made! We had the same engines but the moves on their machines were better,” said Ramesh.

After 19.Ng5 white was very much in the game and the match. Anand had used 62 minutes for his first 19 and had 58 minutes left for his next 21 moves. Black had plenty of pressure and had to address the threats of the pieces and also the queen pawn.

Social media in India compensates for lack of television coverage of chess and people follow the game on the official site live said Ramesh. Unlike in Europe, where people meet over drinks and food they chat in India. Cricket is more popular in India said Ramesh.

Black’s longest thought was over his 19th turn. Carlsen played Bd4 and it block white’s rook from supporting his passed queen pawn. The Internet coverage of this match has not been upto the mark as some wrong moves were displayed in the official site.

After white’s rook development on moves 24 and 25, the slight advantage of the ligher side evapourated. Anand was additionally short of time having only 21 moves for his last 13 moves. All these and some good play helped Carlsen to equalise and keep his slender one-point lead.

“Well you have to keep trying,” said Anand about the match situation. “Today was an intense game but he defended well,” summed up Anand.

“I know it is favourable situation to be on the up,” said Carlsen about the match score.
The scoreline is close after ten games with Anand trailing 4.5-5.5. Last time at Chennai, in ten games the match was over at 6.5-3.5 in favour of Carlsen. Anand has done well outside India but he has to do well now to bridge the one-point deficit in the last two games.