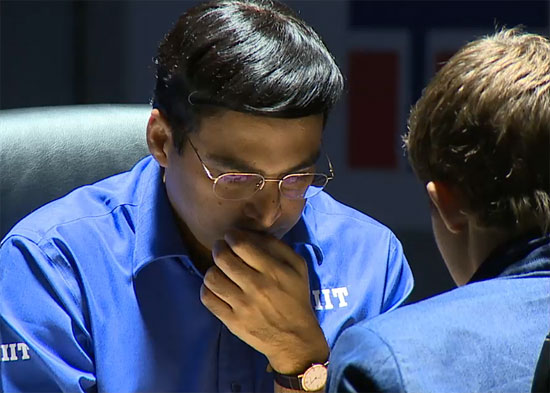 Magnus Carlsen of Norway retained his world chess title beating challenger Viswanathan Anand in the eleventh match game to win the 12-match series with a game to spare at 6.5-4.5. Anand took the risk and played for a win with 23…b5, breaking on the queen side in the Berlin variation of the Ruy Lopez.

Just when experts thought the tide had turned in favour of black, Anand’s idea of sacrificing a rook for bishop on move 27 gave white a safe position in this crucial encounter.

Overall, in the match, Carlsen won games two, six and eleven. Anand won game three and other games were drawn. If Anand had won game six, history could have been different. “Anand fought this match very well,” said D.V. Sundar, Vice President, FIDE who was also in Sochi for some time at the start of the match.

Anand was better prepared and achieved some advantage despite playing with the black pieces. He decided to force something which was unnecessary and it ended well for Carlsen said one Russian Grand Master.

“Carlsen made fewer mistakes in this match and won. Who knows what would have happened if Anand had taken the pawn in game six,” said Peter Svidler, the Russian grandmaster from St Petersburg.

“It was a very tense position. If I play Bg7 it is about equal. Suddenly I saw Rb8. I evaluated this as equal. Suddenly I decided to go for this exchange sac. It was a fair gamble,” said Anand. He said he played objectively till that point and decided to take risk on move 27.

I did much better with white than last year. With black it was a tougher match. His nerves held up well. My nerves were the first to crack. I think he is more stable conceded Anand. “I did many things better, some things worse,” said Anand while comparing the two matches at Chennai 2013 and Sochi 2014.

It was a tough match from the start. Today was the happiest day. After he gave up the exchange, I played forcibly and he did not have any chances. I think the Berlin defence suits my style with both colours said Carlsen. My 29.Nh5 was my best move, said Carlsen.

Carlsen will turn 24 on November 30 and Anand will become 45 on December 11. Carlsen will defend his title next time and Anand is now seeded to the Candidates Tournament. Many new younger players are emerging. In 2014 March, many did not expect Anand to emerge and he qualified by winning with 8.5/14. He could do it again despite being the oldest.