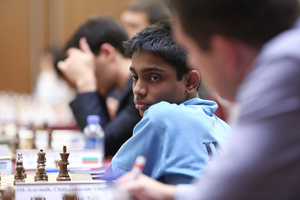 Six Indians Among Leaders At Doha
By Arvind Aaron

The World’s strongest Open Tournament is on at Doha in Qatar from November 26, 2014. Anish Giri of the Netherlands is the top seed and former world champion Vladimir Kramnik of Russia is the second seed.

Indian challenge is led by Pentala Harikrishna. After the first round, Harikrishna, Surya S Ganguly, Abhijeet Gupta, G.N. Gopal, Ankit Rajpara and Neelotpal Das are among the leaders on 1/1.

Among the Indians who drew round one include Shyam Sundar (who faces Kramnik in round two), S Chanda, S Vijayalakshmi, M.S. Thejkumar and Aravindh Chithambaram.

This event was announced as early as May 2014 and is organised by the Qatar Chess Association. Chief Arbiter is IA Takis Nikolopoulos of Greece and the tournament director is GM Mohammed Al-Medaihki.

This Asian event dwarfs mega open events of Europe like the Aeroflot Open of Moscow or the World Open of Philadelphia in number of Grand Masters and quality of the participants.