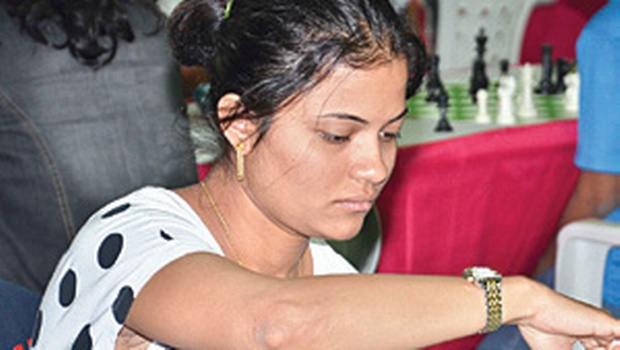 Woman Grandmaster Bhakti Kulkarni remained on course for her maiden Asian continental title defeating Li Xueyi of China in the eighth and penultimate round that concluded here.

With 6.5 points to back her from eight games, Bhakti retained her half point lead over nearest rivals Dinara Saduakassova of Kazakhstan and compatriot Soumya Swaminathan who both have six points apiece.

Saduakassova defeated Gulrukhbegim Tokhirjonova of Uzbekistan in a keenly contested game while Soumya was at the top of her game in outclassing talented youngster R Vaishali. While Bhakti will meet someone on 5.5 points, Soumya is set to play against Saduakassova in her final round game.

It was another fine performance by Bhakti who employed the Chigorin defense to outfox Xueyi and ended her dream run in the championship. While the Chinese might have felt optimistic after grabbing a pawn in the early stages of the middle game, the happiness was short-lived as Bhakti’s active pieces compensated enough for the material deficit.

As it happened in the game, Bhakti capitalised on a blunder on move 21 and won a piece following another inaccuracy by the Chinese. The game lasted 40 moves.

Soumya was not far behind in the catch-up act as she used her white pieces well against Vaishali. It was a Ruy Lopez wherein Vaishali missed some fine prints and ended up losing two pawns. Soumya thwarted further attempts by Vaishali quite easily.

The Indian challenge in the open section however suffered a huge setback as overnight joint leader B Adhiban went down fighting against top seed Le Quang Liem of Vietnam. Playing white, Adhiban went for a sharp position but once Liem defended it should have been a draw. However Adhiban overstretched and lost a pawn after which it was a difficult defense.

S P Sethuraman crushed Jahongir Vakhidov of Uzbekistan to jump to third spot on six points. The lead is shared by Liem and Wei Yi of China who both have 6.5 points apiece while Sethuraman is the only one who is close behind the leaders.

With five qualifications at stake here for the next world chess cup, Surya Shekhar Ganguly, Vidit Gujrathi, Deep Sengupta, Aravindh Chithambaram and Adhiban have all got 5.5 points each sharing the fourth spot. Technically all have a chance to make it to the top five.

In the women’s section It’s a three way race for the title but Bhakti retains the obvious advantage over others. Only the winner in this section qualifies to the next world women’s championship scheduled later this year.