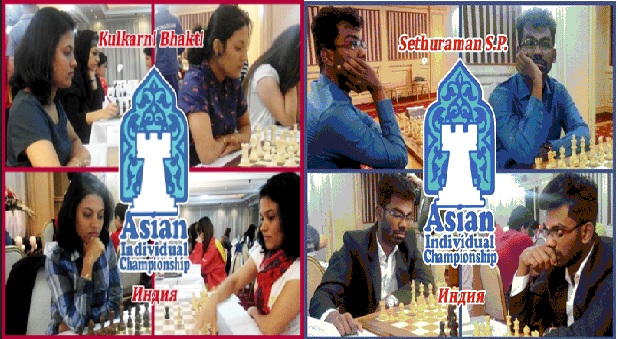 India won the two titles on stake in the Asian Individual Chess Championships that concluded in Tashkent on June 3, 2016. Both S.P. Sethuraman of Chennai and Bhakti Kulkarni of Goa scored identical 7/9 scores to win by a half point margin.

Sethuraman, 23, lost to top seed Le Quang Liem (Vie), drew Aravindh, Gao Rui and beat the rest of the six players. His victims included third seed Wei Yi. Importantly, he won the last three rounds in a row. The top finishers will qualify for the World Chess Cup in 2017 at Batumi in Georgia. Sethuraman gains around 13.60 Elo and should be in the World Top 100 ratings in July.

Fifteenth seed Bhakti Kulkarni, 24, remained undefeated and won the women’s event. Bhakti gains 50.20 Elo from this single event. She was the lowest rated of the five Indians but surprised everyone by winning. In the fourth round, she recorded a win over top seed IM Sarasadat Khademalsharieh (Iran). The top finishers will qualify for the World Women’s championship.

Players from 19 nations in men and 15 in women took part in this event that was organised by the Uzbekistan Chess Federation.