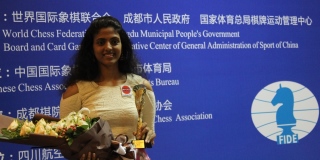 Dronavalli Harika moved closer to the title defeating Nana Dzagnidze 1-1, 1.5-0.5 in the quarter finals of the FIDE World Women’s Chess Championship that is taking place at Tehran.

In the semis, Harika will face Tan Zhongyi (Chn) and in the other match Antoaneta Stefanova (Bul) will take on Alexandra Kosteniuk (Rus).

Her best so far is semis and Harika has reached that stage already. Tan Zhongyi has beaten many opponents like Padmini Rout and favourite Ju Wenjun (Chn). If Harika or Tan Zhongyi win the title, a new champion is for sure. Asia will have one finalist either way and Europe will have the other finalist as former champion Stefanova and Kosteniuk face each other in another semis.

Harika had at best been World Junior Girls champion and winning here will be a huge plus for her chess career. In almost all matches, Harika played the tie-breaks and her rapid skills are helping her win for sure. The event concludes on March 4, 2017.