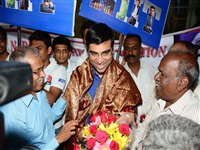 Floral Welcome For Anand At Chennai
By Arvind Aaron

The new world championship challenger, Viswanathan Anand, also a five time former world chess champion was given a warm welcome when he returned home to Chennai on April 2, 2014 after his big victory in the FIDE Candidates Tournament.

V Hariharan, Honorary Secretary, AICF garlanded the new hero who had won the FIDE Candidates Chess Tournament by a one point margin on March 31, 2014 at Khanty-Mansiysk in Russia. Among those who were present to receive the champion were: V Kameswaran, K Thirukkalathy, S Balaraman, K Ganesan, R Srivatsan, S Paul Arokiaraj, B Sakthi Prabhakar, Jagadeesh and Jayavelan.

“Other participants were more nervous than me,” said Anand who arrived in his home soil on Wednesday morning. He said between Christmas and New Year he decided to play in the Candidates and see what happens. He singled out Kramnik as having urged him to play in Khanty-Mansiysk when he had not decided to go ahead. They were playing a tournament in London in December 2013.

Anand said he had never beaten Aronian with the white pieces previously. When starting the event on that note, the rest of the event went well. He called the win against Mamedyarov “crisp” and the one against Topalov was “crucial”. Back in Chennai, Anand said he would like to play in many rapid events and exhibitions in Corsica, Kiev, Geneva and Dubai this year.

Anand said his confidence grew round after round. Anand wanted to take someone he had already worked with and that was the reason to have Sandipan Chanda as trainer in Russia. About Carlsen, he said he has some ideas on how to go about it but would not like to talk about it openly.