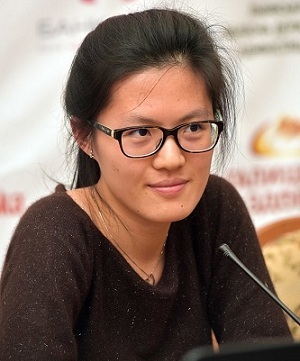 Hou Yifan of China doubled her lead to two points when she beat title holder Mariya Muzychuk of Ukraine in 38 moves with the black pieces at Lviv in Ukraine on March 10, 2016.  Hou Yifan was pressed in the openings as white and had to deliver with the black pieces. And she did! She played the Ruy Lopez with black and seized the opportunity on move 35 in a brilliant manner.

The Chinese player sacrificed a rook and went for a surprise pawn promotion to win three moves later. Hou Yifan leads the 10-match series by 4-2. Four games remain to be played. Asian supremacy in world chess began in 1991 when Xie Jun unseated the mighty Maya Chiburdanidze. Thereafter, Anand followed that by winning the World Chess Championship in 2000.

Suffering two defeats in six games and without a win, defending champion Muzychuk is in big trouble in the match. Mariya Muzychuk may not get another chance to play the Open variation of the Ruy Lopez as black. Hou Yifan may not open 1.e4!

So, the match will not be decided on openings but in the middlegame where the Chinese is dominant. Hou Yifan is well placed and poised to win the title back in the World Women’s Championship match.