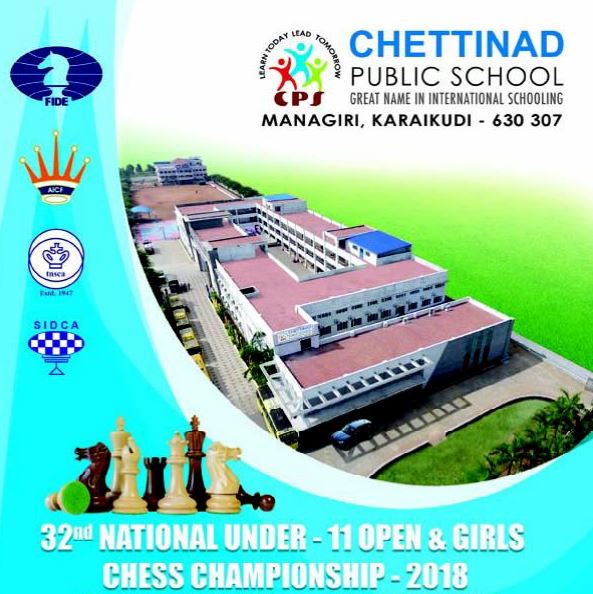 Shreyash Shuvam Patnaik of Odisha emerged on top with 7.5 points after eight rounds of the Chettinad Public School 32nd National Under 11 Chess Championships, organised by the CP School, Karaikudi.

Ananmay Sharma of Gujarat and Shahil Day, the second seed from Assam are closely on the heels with 7 points to their credit. In the girls’ category, Tejaswi of Tamil Nadu was brought down to earth by her teammate and the top seed Savitha Shri. The duo, along with Sinthia Sarkar of West Bengal, who defeated another Tamil Nadu girl K Sinthusree. B Rianna Netta of Tamil Nadu is on the second spot with 6.5 points, because of her win over MS Harshavardhini of Pudhucherry.

Against Colaco Reuben of Goa, Shreyash built up a good position right from the beginning. Once he won an exchange, Shreyas was unstoppable and went on to win the game comfortably in 47 moves. In the Taimanov variation of Sicilian defence, Shahil Dey was not comfortable with the position during the middle game. But, once when the queens were exchanged, Shahil gained the upper hand and grabbed a point. In the Slav defence, Ananmay Sharma of Gujarat, the co-leader in the earlier round had to satisfy with half a point against Mahendra Teja Mekala of AP.

Savitha committed a few mistakes in the opening of the four pawns variation of the Kings Indian Defence game with the leader Tejaswi, which gave a clear advantage to the latter. But after a series of mistakes from both players, Savitha managed to get a better position. Savitha’s two connected pawns raced to the eighth rank, paving a win for her. In a similar fashion, fortune fluctuated between Sindhusree and Sinthia Sarkar due to their errors and the latter had the last laugh after thirty-three moves, to subdue Sindhusree.