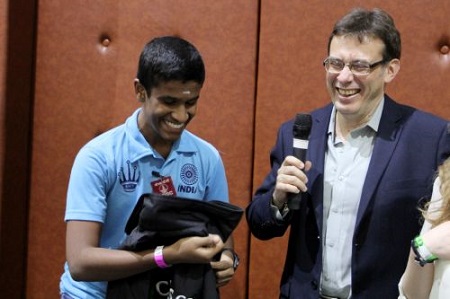 On December 18, 2014, former world under-16 champion Karthikeyan Murali won two games in a row for the Indian Youth Olympiad team to cross the 2500 rating mark and complete the Grand Master requirement at Gyor, Hungary.

These victories were so eventful that India won 2.5-1.5 against Georgia and Canada to catch up leaders Russia on 12 match points.

Iran shocked Russia 2.5-1.5 to open up the title chances in the World Youth Chess Olympiad. The title race will be close as India, Iran and Russia have beaten each other and they will face other nations in the last three rounds.

Karthikeyan Murali crossed over to 2501 and obtained the required rating certificate from the chief arbiter and has become a Grand Master. “I was on night shift but he called me and gave the good news, about becoming a Grand Master,” said Karthikeyan Murali’s father who is an Engineer with the Tamil Nadu Electricity Board.

Karthikeyan Murali’s rating performance of 2635 is the highest among the Indians in Gyor. He is playing on board two behind Diptayan Ghosh but ahead of Aravindh Chithambaram.

Indian coach Grand Master R.B. Ramesh has congratulated Karthikeyan Murali on his crossing the 2500 rating mark and becoming a Grand Master in a post on his Face Book page.