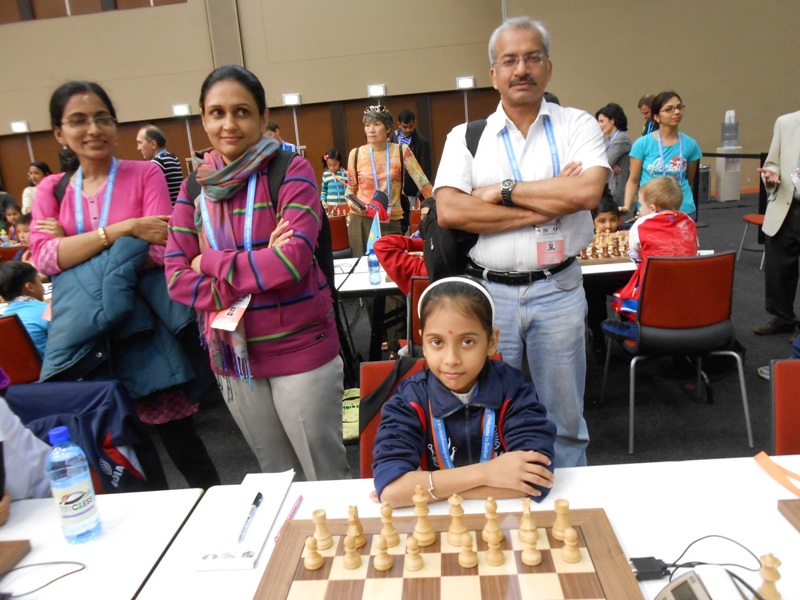 Divya Deshmukh with nine points maintained the sole lead in the U-12 girls section at the end of the tenth round in the world cadets chess championship 2017 being held at Pocos de Caldas in Brazil.

Divya defeated Bobomurodova Maftuna of Uzbekistan in the tenth round on Wednesday. Divya is closely followed by A. Matus Nastassja of the United States with 8.5 points. Top-seeded Rakshitta Ravi is in joint sixth position with 6.5 points.

In the U-12 open section, India’s hope S. Rohith Krishna missed winning chances against the highest ranked player in the tournament Sindarov Javokhir of Uzbekistan to lose his game and stay in 6.5 points. Meanwhile M. Pranesh won against Chasin Nico Werner of the United States to move to 7 points.

In the U-10 girls section, M. Sahithi Varshini has moved to joint second position after defeating Wang Ellen of the United States in the tenth round. Sahithi has 7.5 points. B. Savitha Shri is behind her with 6.5 points.

In the U-10 open section, H. Bharath Subramaniyam beat Vidyarthi Vyom to move to joint second position with 7.5 points. Dev Shah and Shahil Dey have seven points each.

In the U-8 girls category, A. N. Shefali despite her loss in the tenth round continued to be the top placed Indian with 6.5 points. Sneha Halder is behind her with six points.

In the U-8 open section, A. R. Ilamparthi defeated Pham Tran Goa Phuc of Vietnam to move to joint fourth position. Ilamparthi has 7.5 points. Daaevik Wadhawan is behind him with seven points

Eleventh and final round will be played on Thursday.

Photo Caption: Sahithi Varshini in action at the world cadets chess championship 2017 being held at Pocos de Caldas in Brazil.